Writing retreat, Santa Fe. So, I think in yesterday’s post, I kind of underplayed finishing a story. It was just a story, yes, but it was also, I *think*, the last story to go into the Jump Space book. Which means I sort of finished a full draft of a book yesterday, which is kind of a big deal!

It will need at least one more big editing pass, this book, but most of the stories are finalized, so I don’t actually think it’ll take that much longer to get a full draft that I’m pretty happy with. Then the next step will be sending it to one or both of my workshops to do a pass — I’m especially interested in hearing whether the collection feels like a complete and coherent book to them, or whether they think I should either cut stories or write new stories for it.

Once that’s fairly well settled, then I send it to Jed, my editor at Constellation Press, and we see what he thinks. If he doesn’t want major changes, then it becomes a matter of implementing line edits (he’s a great line editor) before calling it done. So, as you can see, it’s still quite a while betweeen now and finished book, with plenty of stages in between.

I’m going to say all of that will take at least 3-4 months? So finished by end of spring semester, hopefully? I’m not sure what that will mean for release date — the book is also coming out in print from Lori Perkins at Riverdale Avenue Press, and we had originally talked about an October 2022 release, but that may be a little overambitious. We’ll see. (Lori, I’m going to drop you a note soon! I know I owe you a page count on the cancer book too….)

But still, worth marking the milestone of finishing the full draft! I am excite!

Today, I’ve come over to Alex and Susan’s AirBnb, which is exceedingly lovely, with lots of good work spaces, as you can see.

The plan is to write for about three hours, then go for a little walk around the shopping district of Santa Fe; I’ve been there before, but it’ll be nice to visit again. And after that, maybe a little more writing, maybe we go directly to Ten Thousand Waves for hot tub (with more writing conversation, no doubt) and Japanese dinner.

I think I’m going to try to implement revisions on one of the long stories in Jump Space now, maybe do another quick pass on the story I finished yesterday (tentatively titled “Let Us Not Speak of Weddings”). And then, take a deep breath, and dive back into the big novel, Indenture. Gah. It’s a little scary facing that book again. Maybe I’ll just dip a toe in instead of diving. We’ll see…

“The package was small, barely larger than his closed fist, wrapped in brown paper and sealed with heat-tape. He tore it open, and a little metal chest fell out, along with a paper note. The note had his name on the front, written in handwriting he knew from seeing her scribble on her pad in their little grey room. He almost threw it in the trash, but the chest was oddly cold, and the mystery of it was enough to make him open the folded page.” 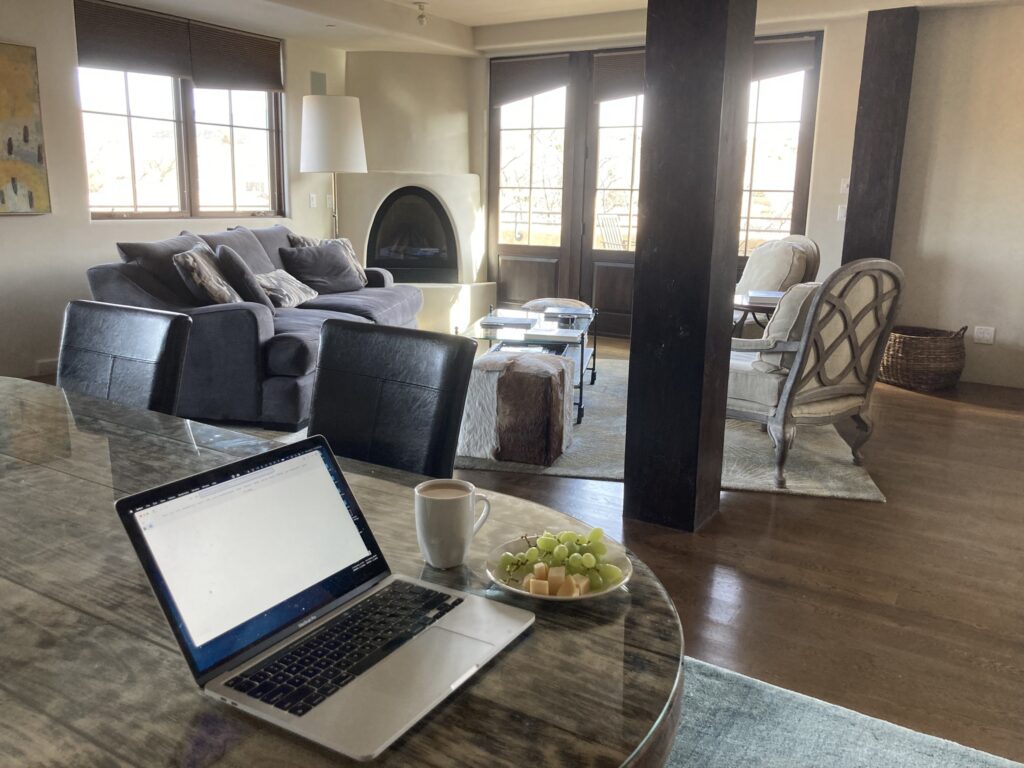