(Actual birthday is tomorrow, but Monday is not a good day for hosting parties.)

It was, in fact, one of the nicest parties I’ve had in years, and that’s a little funny, because it was also one of the smallest.

We had something like 25 ‘yes’ and another 20 ‘maybe,’ but between the massive thunderstorm, the blinding heat, and the COVID navigation (some people decided last minute that they weren’t comfortable coming to a party yet, others had a small cough or cold and didn’t want to risk transmitting something), we only had about 12 actual attendees.

And then they were spaced over the length of the party, from 2 – 9 p.m., so at the busiest, there were about 8 people there (plus a few of Kavi’s vaccinated friends upstairs with her), so I pretty much got to talk to everyone all the time, which made me realize that I miss dinner parties, which are much more likely to have that kind of structure, and I think one thing I want to do more of in my 50s is have dinner parties in my life. Thinking about how to make that happen.

We ended up almost entirely outside on the porch (picture in following post), and I took no photos during the party itself because I was busy talking to people, several of whom I hadn’t seen in a year-and-a-half and whom I have really missed, as it turns out. I actually want to spend more time with all of them, so will need to figure out how to make that happen.

Here are some flowers from one of my guests, and a new cooperative board game from two others. (Particularly excited because it looks very Star Trek-y, and I am a massive Trek fan and rather identify with Captain James T. Kirk in too many ways….)

I’m planning this 50th birthday to be a rather extended celebration; Jed is coming to visit in a few weeks, so we’ll do something birthday-ish with him to cap it off. But this party was certainly a highlight! 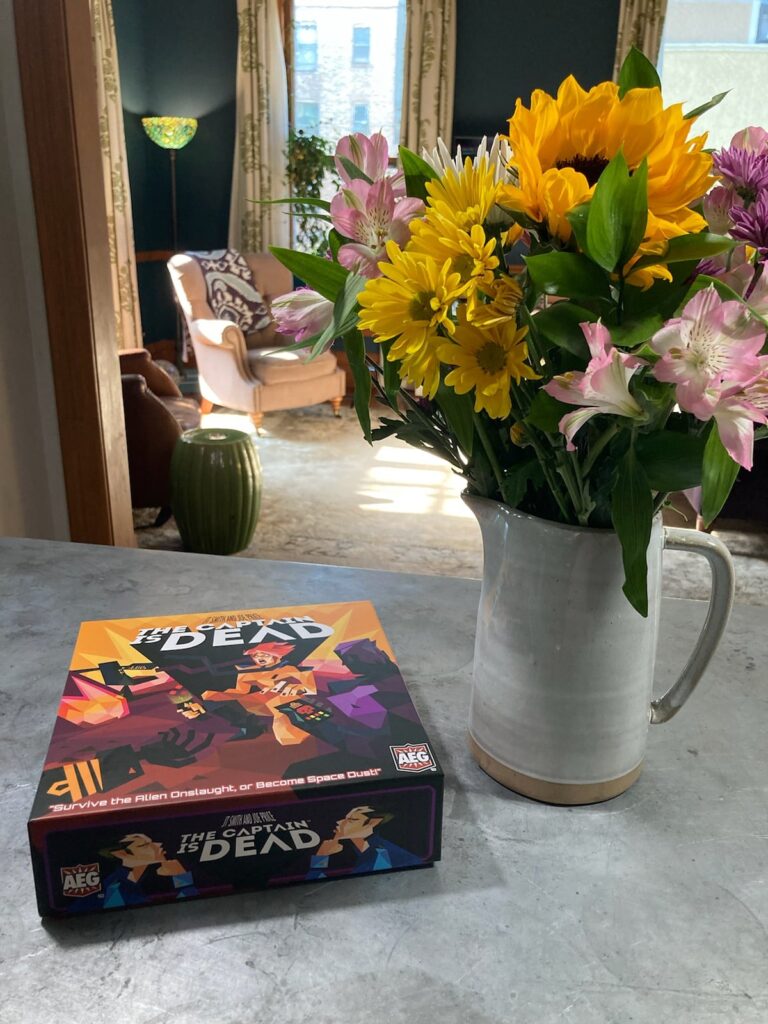