Well, this feels like some sort of pandemic milestone. For my upcoming 50th birthday, I decided to bring back our traditional weekend potluck and board games. In pre-pandemic times, we did this at least monthly most of the time; sometimes more often than that.

It felt very weird, going through the party invite list — lots of old friends, some people I barely remembered (whom I’d probably met once at gaming or a writing event or some such). It feels a little unreal now, that we went a year-and-a-half without seeing these people at all. That for week after week after week, it was just the four of us in this house.

I know there are lots of people who live in pretty isolated circumstances, out in the rural countryside, for example, but I, I am a social butterfly. People people people.

(If you’re not on the local party / board game list, and you think you should be, let me know? Invites went out a few minutes ago, so update your e-mail addresses with me, check your spam folder, etc.)

On a related note, I realized recently that Kev and I have somehow failed to make any couple friends in the last decade. It’s weird. He has some friends of his own (mostly math people, or old friends) and we used to have friends in common that we could do things like go out to dinner with…but after college, I don’t know, we got really bad at making new friends like that?

We’re planning to be in Oak Park for at least seven more years, and now that the kids aren’t tiny and we can easily go out for dinner on occasion, I am really feeling like I want people to do that with.

But I don’t want to torture introvert Kevin with strangers and making awkward conversation. On the other hand, that is often the main path to actual friendship, enduring some stranger-ness and awkward conversation. Kev says he’s up for trying it, so I guess I’ll try to organize a couple dinners out. It feels very weird, like we’re trying to date couple-friends.

I don’t know how to do this, but I guess we’ll just muddle through an attempt or two at least. We may end up fleeing back to our current state — where he socializes with me, the kids, and separately with a few work friends, and I have a hugely active social life that he generally doesn’t participate in. But nothing ventured, right? It’s worth a shot.

I also (finally) reached out to the parent of a friend of Anand’s, hoping that they might be up for bubbling. Anand is really starting to get incredibly bored and is clearly desperate for socializing — he spends a ton of time talking to this kid online, and if they can get together in person, I think he’ll be much happier. We’ll see what they say.

I’m also trying to figure out how I can get him to meet a few of his geeky compatriots before he starts middle school in the fall. Maybe I can run an outdoor masked RPG session? It’s stupid hot right now, but it should cool down eventually…

Vaccines for younger kids, we need ’em as fast as possible…

(Photo from the plane coming back from California. I’m not sure what the arrow is for — something safety-based, I’d guess. But it felt appropriate at the time, looking back over where we’ve been, apprehensive, yet hopeful, about what’s to come. Again, so many sympathies for all of you, across the world, who are still deep in the grip of the pandemic. Vaccines for everyone, as fast as possible. Faster.) 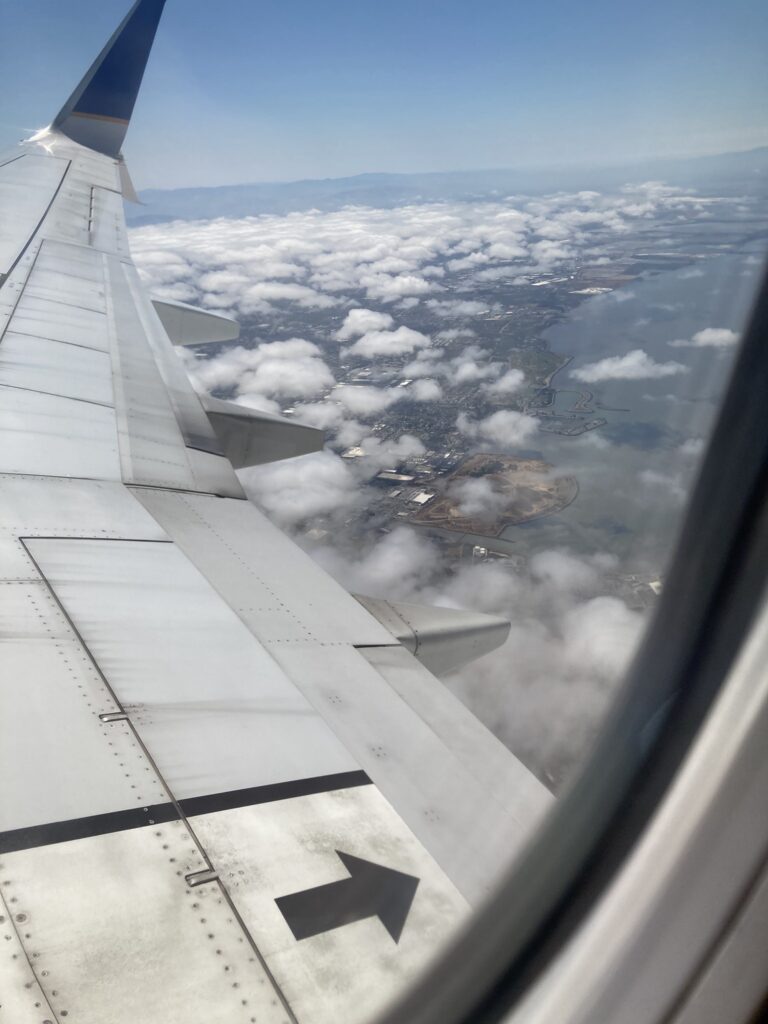