Yesterday, we taught some of them how to edit WordPress pages, and then they spent a while digging up stories and essays that I never got around to adding to my website and added them — esp. useful for pieces that were published online in places that didn’t keep their archives up!

They’re also all fiction writers themselves, so I spent a little while talking to them about why they might want to amend their contracts as needed to make sure they had the right to put their pieces up after six months; I always try to with mine, and it’s rare that editors mind these days (they used to be more grabby 25 years ago).

Newbie fiction writers tend to be afraid that an editor will get mad if you ask about amending the contract. Editors will not get mad, and they will not pull your story. Unless they are wildly unprofessional (and I’ve *never* heard of that actually happening), the worst that will happen will be that they say no to the contract change. So ask.

We checked in on the Kickstarter — we’d blown past the 2nd stretch goal, and Emmanuel thought we should go ahead and set a 3rd goal for another $2.5K, and that seemed a little ambitious to me for 48 hours left, but what the heck, nothing ventured, right? So I set one (with a sampler of Serendib Grilling as the reward), and we’re now 25 hours out, at $8660, so we have about a day to possibly get another $1340 to meet the goal. Possible, certainly, since we did about a thousand yesterday. We’ll see!

Hopefully it’s exciting for the students (I know, they’re not all students anymore, but they’re mostly my former students, and in my head, it’s hard for me not to think of them as students) to watch a Kickstarter do well, and with luck, it’ll inspire them to do their own down the line. Darius Vinesar, who’s been working on my podcast with Benjamin Rosenbaum is starting his own podcast now. And so it continues…let a thousand podcast flowers bloom…

It’s sort of a haphazard, ADD-fueled internship at the moment; we’ll get more organized as we go. This is the first season we’ve had Serendib House interns. But hopefully I can teach them some useful things, and at least I put out a good snack spread for meetings. We broke for lunch, where I added garlic chicken curry (they really liked it

), roti, various other things I’m forgetting now, to the counter. It turns out that having four 20-somethings stop by is pretty helpful for cleaning out the leftovers in your fridge.

After lunch, we went down to the basement, and they spent an hour helping me clear out and re-organize the Serendib House area — books to ship out, soap and candle-making supplies, packing materials, specialty cookware. It was really organized two years ago, but then, y’know, there was a pandemic, and everything went to hell. We got the floor clear again, and things are mostly up on the shelves now in there, though it all could use some further organizing. We’re getting there, though.

They’ll be back next Monday. I think I may teach them how to make curry powder. I could use some help with the stirring. And/or baking shortbread for the July treat boxes.

(All the passionfruit marshmallows are gone now. Alas. I will just have to make some more.) 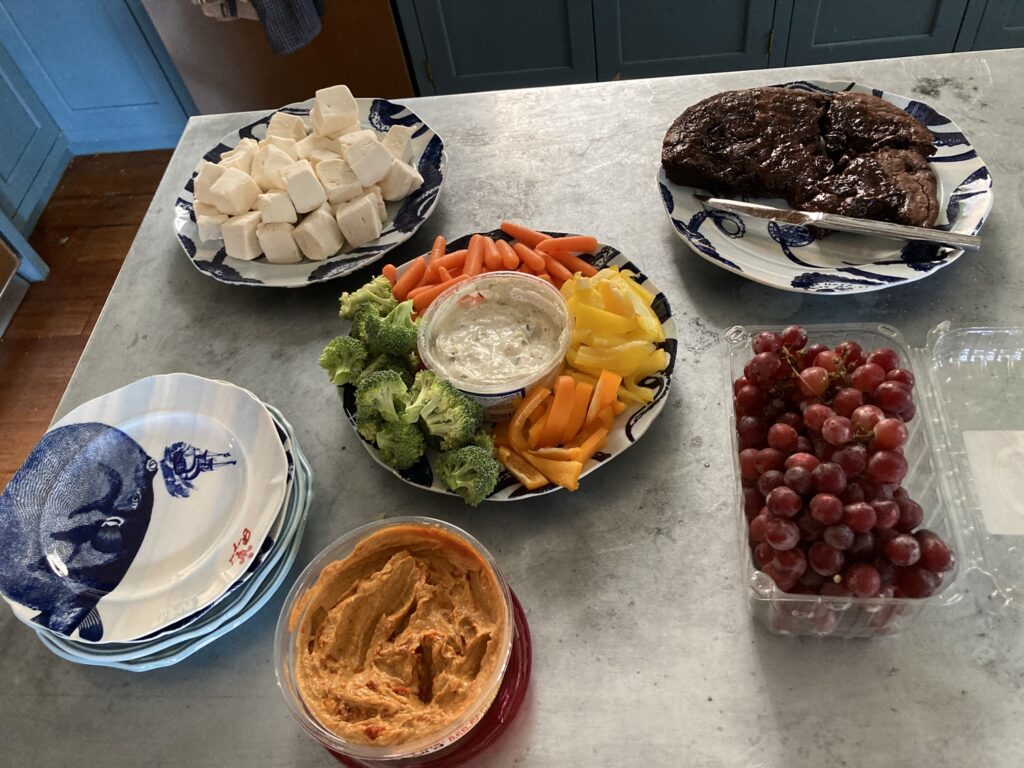