I’m still kind of taking in the fact that I won an Illinois Arts Council fellowship today. I’m not sure how clear it was in my earlier post that this is a very big deal to me.

It’d be nice if I had full confidence in my writing and didn’t need outside validation, but honestly, it’s been a long time since I published a serious literary kind of book (Bodies in Motion came out in 2005).

HarperCollins cancelled the novel I wrote when we couldn’t get it to be the kind of book we were both happy with. (I wanted it to be literary fiction, in a similar vein to Bodies in Motion, but with poly family drama and more war stuff mixed in. My editor wanted it to be chick lit with sexy cheating and brown people. Gah. I did four revisions for her before we had to admit that we were just never going to get to the same page. I didn’t write anything for a year after that.)

I wrote an entire YA fantasy novel that I still love, but which my agent couldn’t find a publisher for. I wrote a memoir about love and nationalism, and then rewrote it, and it’s still not to a point I’m happy with — I think it needs another draft or ten. All of that feels like a lot of failure, when I’m in the right [wrong] kind of mood.

And while I think The Stars Change is pretty good, it’s only a novella right now. (Though Jed Hartman is helping me change that.)

I guess sometimes I’ve been feeling like I don’t have that much to show for the last 16 years. I spent an entire podcast (maybe two hours) recently, venting to poor Benjamin Rosenbaum about this and related issues.

I mean, there were two children, so I have them to show for that time. There was also cancer, which isn’t exactly an accomplishment, but did certainly eat up some time and energy. I got a teeny little book out of that (Perennial), and maybe I’ll turn the cancer log into a book at some point, but really, the only big substantial thing I’ve done in the last several years, writing-wise, is the cookbook.

I poured a LOT of time and energy into Feast, but it’s certainly not the kind of thing that is generally considered literary. [Insert obligatory sidebar here about women’s labor, what society values, etc. You know the drill.] So I guess it’s just nice to know that a piece of the literary world still values at least some of the things I’m working on now. That’ll carry me for a while, when the imposter syndrome is hitting hard.

The $15K is also wonderful, of course. I’m still thinking about what that’ll be used for; we need a new roof, but luckily, we have money saved up for that. Kevin does a good job of making sure our overall household budget is in decent shape.

I think mostly the funds will go towards continuing to pay Serendib staff to do things like work on my website, social media, taking book orders, shipping them out, etc., to buy back my time, so that I can focus on writing instead. That feels like an appropriate use of the funds.

I’ll spend a little bit on fun stuff too — I walked up to 16 Suitcases today and found a few cute tops on the sale rack, which will help me vary things up when I’m recording the podcast / teaching & meeting on Zoom. I also bought a Pendleton wool blanket today, because I want to spend more time outdoors, both by myself, and with the family, and this blanket will make it even cozier to hang out by the fire, to sit and dream a little. Little treats, to celebrate.

The semester is ending — my e-mail is filling up right now with students’ final papers and projects. I love the writing students’ end-of-semester self-evaluations; I like seeing them start taking themselves seriously as writers, as artists, often for the first time. I’ll grade over the weekend, and then Monday, it’ll be time to start summer writing.

Two areas to work on. The science fiction, the food essays. The trick is to actually find ways to make myself slow down enough to think deeply, rather than being consumed by all the little household, etc. tasks. Sitting by the fire helps me, I think. I want to do more camping this summer.

Maybe I’ll use some of the funds to buy a tent. Maybe I’ll run off to the woods by myself on occasion, instead of always bringing the family along. Maybe I’ll turn into a tree. We’ll see.

Here’s a story I wrote a long time ago, “Esthely Blue,” about being poly and being fragmented and a little bit about turning into a tree:

Pictured below, our new Solo Stove. I like it — the fire burns quite hot, and as promised, it’s much less smoky than our previous fire pit. The kids had a lot of fun feeding twigs into it for the last hour, while I sat in the shed nearby, surrounded by darkness and candles. 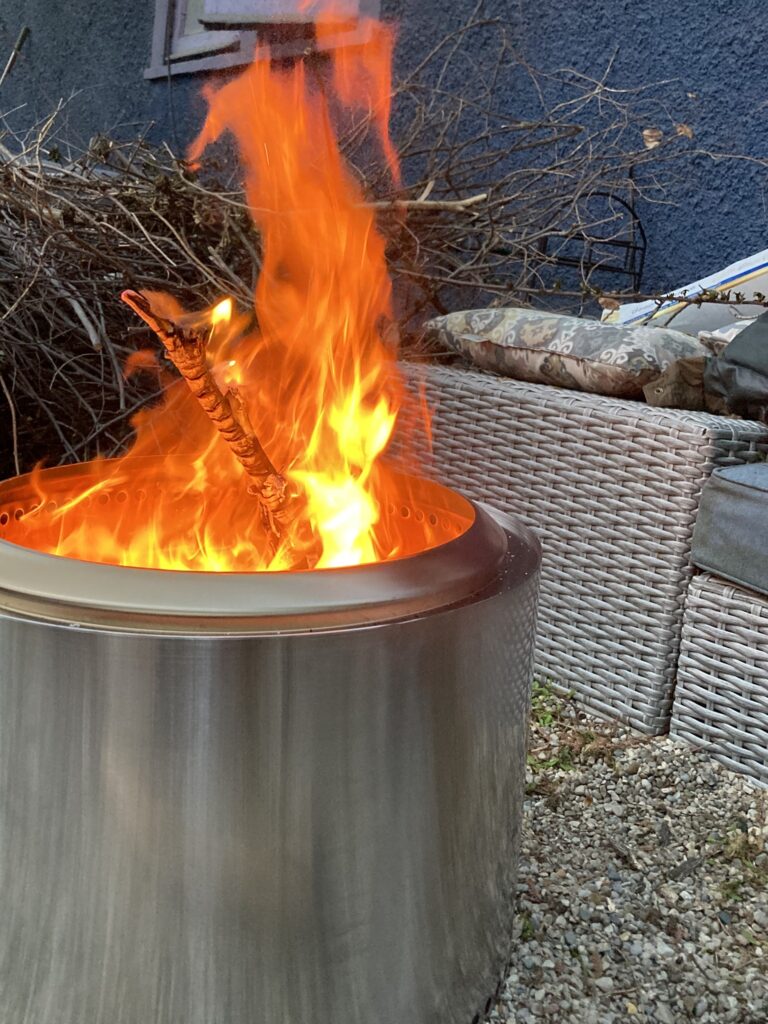