Made some big changes to the Jump Space book this past weekend — not big in terms of word count, but in concept.

(Note that there are some spoilers in the graphics, if you look closely (such as who married whom, who fostered whose kid, etc.), so if you haven’t read the stories, proceed at your own risk.)

I started sketching out some genealogies, in part just to keep it all straight in my head. But as I went, I realized that I didn’t really want to make it just an interstitial story intercut with other separate war stories — that would be fine, but what would work even better, I think, is if at least some of these people are actually more directly connected.

So when you read “Webs,” for example, you’re not just reading a story about Anna and Piotr and they’re random people, but in actuality, Piotr is the brother of Sergey (protagonist of just-published “Among the Marithei”), and both of them come from war-torn Nadezhda. They were separated by the war as young men, and grew up on different planets, and the fact that they’re brothers may never play into any stories I actually write. But you never know, it might.

I sketched out the family trees on regular paper, then transferred them to a big sheet with colored pencils, to help me visualize all the relationships. That also helped me make sure that I was getting the generations and the timing right — right now, I think “Jump Space” takes place about 30 years before most of the rest of what I’ve written in this universe.

Then I redrew them digitally in Procreate, for ease of editing going forward.

I’m not quite done — I need to check whether “Paper Star,” “Hush” and “Communion” have any similar connections. I don’t think so? But I’ll look at it in more detail tomorrow.

I also don’t really know as much about genealogical notation as I’d like — I’m guessing there’s some standard way to indicate first marriage / second marriage / etc.? It’d be helpful to know that. Also if there’s a standard way to note simultaneous multi-person marriage?

For now, this was satisfying. Next, maybe a map? 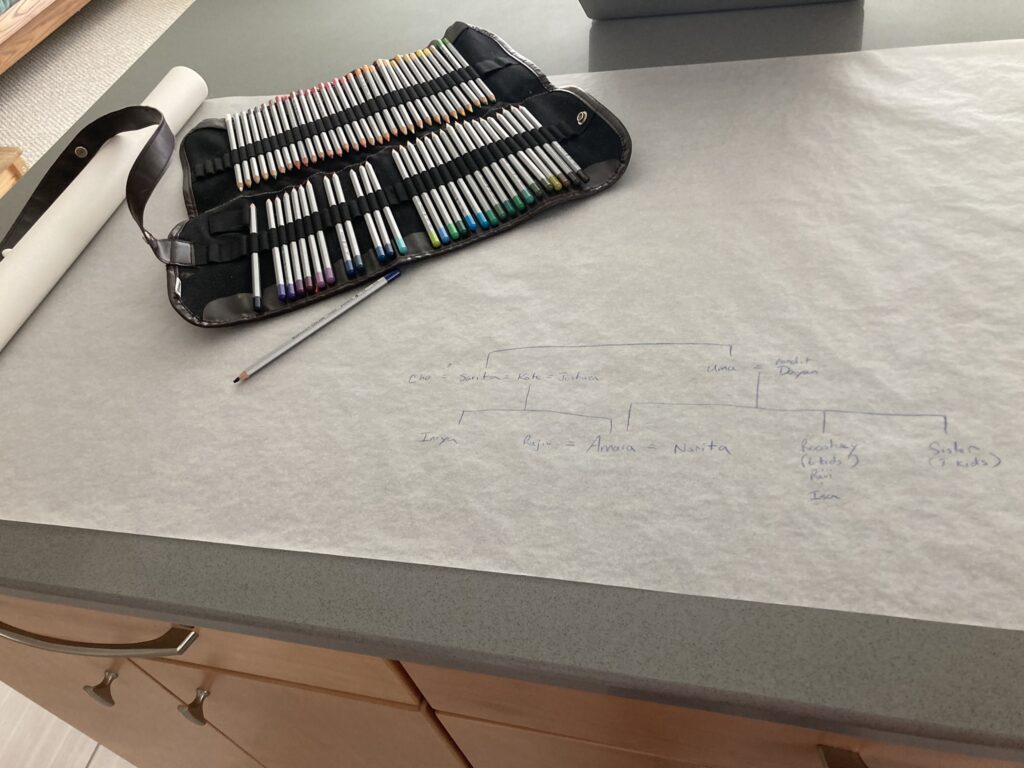