It’s a little surreal, somehow, seeing our podcast on my phone. Benjamin Rosenbaum and I made a podcast! How bizarre. I think it will be of interest to writers and editors and teachers and anyone who is trying to make positive change in their community, but we won’t really know for a while whether anyone will actually listen to it.

I do wonder how many people will check it out, see the first episode is 1 hr and 42 minutes, and scroll right past. It was tempting to try and do something quick, in keeping with this age of short attention spans; we had a lot of discussion of length in the early days of recording.

But I’m afraid the essence of what we were trying to do would be lost if we’d aimed for a terse format — we wanted to offer a long, rambling conversation, with time for exploring nuance. (Although I admit, I’m tempted to ask Darius Vinesar if he wants to make a ‘short take’ version of the episode for those who just want a taste of it. I’m not sure it’s really possible to do that in any kind of coherent way, though.)

I’m listening to the first episode now, and it’s even more surreal, somehow, listening to something we recorded early last summer. We’re trying to introduce ourselves, and it’s kind of amazing how much we wander in that process. After all the strict 2-minute candidate introductions of the last several election forums, this is almost a shocking contrast.

Jed Hartman’s show notes do offer a sort-of-highlights reel, I suppose. This is what he has for the first episode, which at least makes it easier to skip around to the parts that interest you? Online magazines, and science fiction and racism and the time I said the n-word on a panel (GAH), and forgiveness and Dr. Who / Star Trek….

0:10: Introduction to the podcast.

3:50: Strange Horizons, and staff not getting paid.

5:15: Identities, and gendered differences in how people identify themselves.

31:05: Mary Anne’s role and voice in the community, including Strange Horizons.

33:20: One area where Mary Anne and Ben overlap: a strong interest in community.

39:05: More differences in Mary Anne’s and Ben’s approaches, such as their different reactions to MoonFail.

46:45: Forgiveness and recovery and redemption after failures and mistakes. Also racism in sf and horror.

52:35: Brief intermission, featuring an ad for the Speculative Literature Foundation.

53:15: Continuing the discussion of forgiveness and redemption.

1:08:00: What you’re likely to hear in episodes of this podcast, and some possible titles for the podcast. (This episode was recorded before the podcast had a title.)

1:13:50: Approaches to science fiction vs literary fiction, and plausibility, and Dr. Who.

1:27:30: Ben’s rule of thumb about things persisting into the future; also cognitive estrangement and operationalizing strangeness.

Listen wherever you like to listen to podcasts (and if it’s not there, please let us know, so we can fix that!) — Mohanraj and Rosenbaum Are Humans.

If you’d like to support the podcast directly, you can join us on Patreon here (there are even some little rewards, so check them out!) — https://www.patreon.com/mrahpodcast 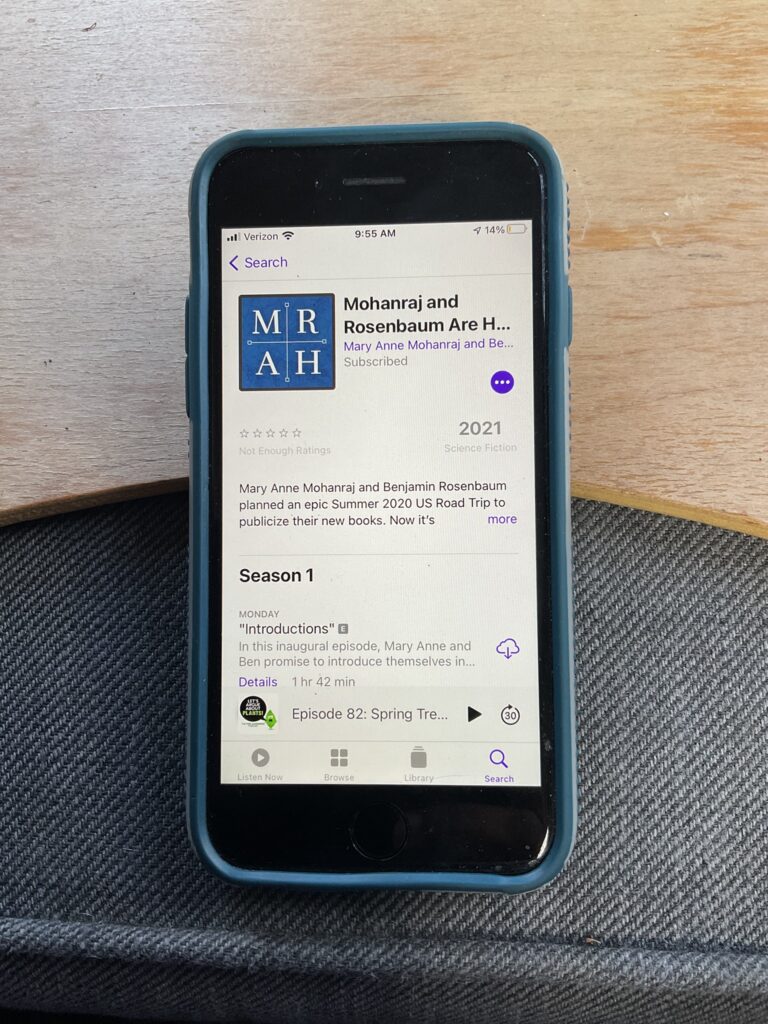