After most of a day mostly procrastinating (after the podcast recording, re-reading an old Bujold favorite novel, with some sweet-making mixed in), I finally settled down at 7:30 for a story revision. Last pass, which involves reading the thing out loud and fine-tuning language, which is much less onerous with a 4699-word story than with a novel, but my voice still got dry and tired; I’m out of practice with this kind of thing. Talking is hard.

But I finished, even in time to play a promised 45 minutes of Terraria with Anand, where we managed to do pretty well with an event, but in our attempts to get to a big boss battle, I managed to die over and over and over again before we even got to the battle, so I guess I was a little tired. Anand tries very hard to “Mommy-proof” (his term) the world before I play with him, doing things like building bridges over the lava so I don’t accidentally burn up, directing pools of water to the bottom of mineshafts, so if I fall down, I don’t smash myself to pieces on the rocks, but there’s only so much he can do, poor kid. Anand kindly let me beg off after the third death in five minutes, possibly only since it was basically his bedtime by then anyway.

Then I left Kevin to put Anand to bed (generally his job), came back to the computer, took a deep breath, and submitted the story. It’s been a while since I did that kind of thing. We’ll see what the editor thinks. Eep. (Not as nerve-wracking as it might be, though, because Jed already said he wants to include it in the Jump Space book Constellation Press is putting out. It’d be nice to have a magazine publication for it first, though.)

Her implant was feeding Jenny local news – there’d been an incident at a nearby school, an active shooter, which had spiraled out into a series of attacks, protests, riots that now weren’t about the shooter at all, who was apparently some lovesick teen. Now there were adults involved, street fighting and store looting, old tensions flaring up into new battles. The settlers of Antira had imagined they were leaving all that behind, on old Earth. Not so much.

Citygov was telling everyone to stay home, especially those not native to this world. Stay in your homes until further notice – glaring red printed across her retinas, echoing in her head, until Jenny shut it off, shut it all down. *I didn’t vote for you.* It was too much, the clamor inside and out; she couldn’t do anything about the external noise, but at least she didn’t have to tolerate it in her own head.

She couldn’t do what the voice told her, anyway. Jenny had to actually get home before she could stay home. But that should be easy enough – she had a flyer waiting at the parking bay, and it was barely twenty blocks from the port to her condo complex. She was fully human, native Antiran, born and bred to this world for seven generations. Her ancestors had emigrated directly from Old Earth in the first wave of Jumpships. She wouldn’t have any trouble. 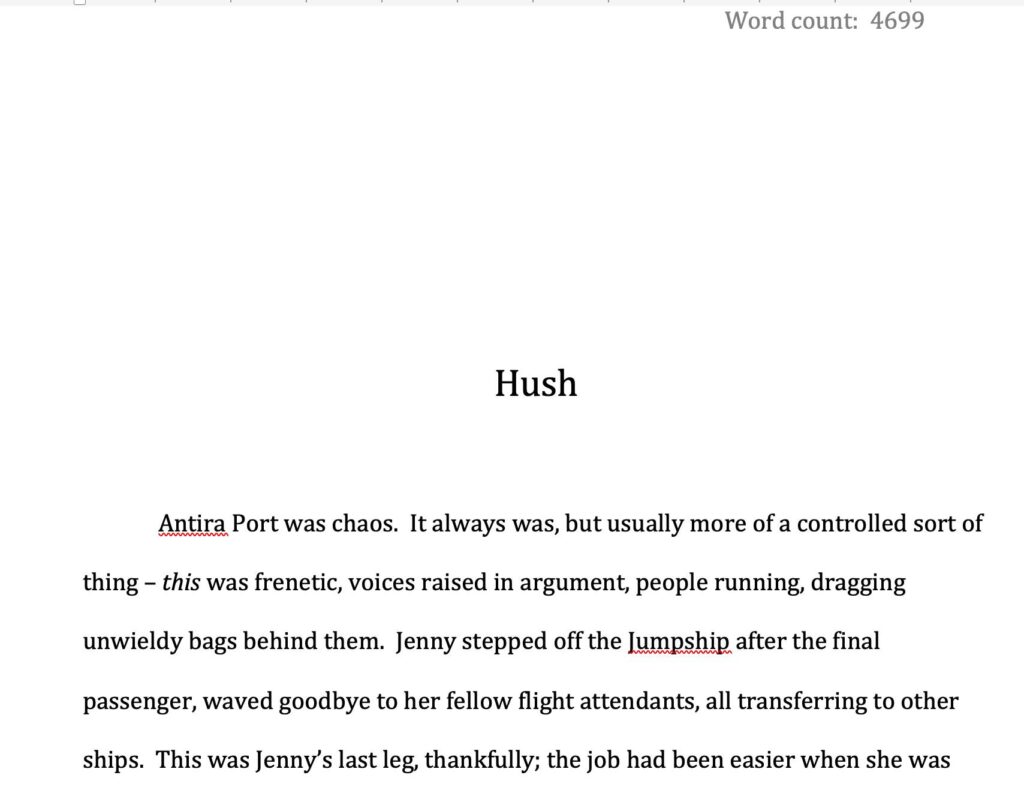