[Editing to note that there are a lot of people who know this subject much more deeply than I do — this is mostly me trying to think through my own thoughts on it right now, and is not meant to be in any way authoritative or comprehensive.]

I keep thinking about the “defund the police” language and concept, and at least on a local level, I think you have to take into account that some of the resistance, maybe a lot of it, is coming from people who either are cops or have relatives/friends who are cops, and who are strongly experiencing three things:

a) they’re being stigmatized as racist and violent, and they believe (or know) themselves to be neither of those things, and so it feels incredibly unfair

b) they’re being trained in pseudo-militaristic fashion to simultaneously be on a hair trigger to respond to violence (with guns in their holsters, waiting), WHILE SIMULTANEOUSLY being asked to be gentle and de-escalating with grandma’s mental health crisis, when grandma is screeching and waving a heavy metal poker at them — that has got to be incredibly difficult, trying to have both sets of training coexisting in your every moment on the job

c) people are raising families on the salaries they make as police, and so when you talk about possibly reducing the police force, what they hear is that Uncle Joe is going to lose his job, and he’s got three kids, one of them about to go to college and another one needing orthodontia and his youngest boy has a host of expensive ADHD and speech therapies…

This is hegemony at work, of course. You let a system build up, and people become dependent on it, entangled with it. There are entire towns where the economy is dependent on the horribly managed and profiteering private prison attached to it, and when you shut down that prison for its abuses, you also put three hundred people out of work, and disrupt thousands of lives. No easy answers there.

(If you’d like to learn more about hegemonic systems specifically around this subject, Foucault’s _Discipline and Punish_ is THE text on the subject, and is very readable — it starts with a dramatic rendition of someone being ‘drawn and quartered,’ which was when we used to tie a criminal’s arms and legs to four horses and then crack the whip so the horses would run in four different directions, literally quartering the person, tearing them limb from limb. I’d love to see everyone involved in this debate read this book. I’d assign it at the police academy, if it were in my power. It would be terrific for a community book club reading.)

On a local level, here for Oak Park, all I can think right now is that our police force seems too large for the community, based on some comparable stats. I think it’s that large in part because some locals perceive a lot of threat coming from nearby Austin (which is an impoverished part of Chicago, neglected by city funding, and majority Black), and so the cries for ‘more security, more police’ are loud.

So if we’re balancing community needs, on the one hand, I’m going to prioritize the Black folks who are saying, “There ARE some racist and violent cops, as we all know, as has been proven on the bodies of Eric Garner, Breonna Taylor, George Floyd, etc. Our lives, and especially our sons’ lives, are in danger from cops.”

As a result, when a cop is walking their block, coming to their door, pulling them over for speeding 5 miles over the limit, they don’t experience comfort and reassurance that the cops are watching out for them — they experience a long history of cops making their lives harder (especially if they are poor), and on top of that, justified fear and panic. (If you haven’t read _Between the World and Me_ yet, please do. Please. It is very short, and Ta-Nehisis Coates is a brilliant, heartbreaking writer.)

But on the other hand, and this is probably where I diverge from some of my activist friends, I’m also going to want to preserve jobs as much as possible, especially during a pandemic. I don’t want cops’ families to be losing their health insurance right now, or be unable to pay their rent or mortgage.

So what does that look like, in terms of defunding the police — or as I’d prefer to frame it, restructuring and re-allocating police funding?

Well, I’m not running for Village Board, so I haven’t done a deep dive into the concrete specifics yet. And to be fair to candidates, they don’t generally have easy access to that kind of information — in my experience at the library, it took me about a year into the job of being on the library board before I really understood the lay of the land well enough to start suggesting changes.

ALSO, keep in mind that changes at the board level tend to be slow. Government is big and ponderous, and when you’re trying to make change there, you’re like little mice nipping at the heels of an charging elephant, trying to get it to shift five degrees to the left, so it doesn’t run straight into your home. Also board members tend to have a lot less power than community members think they do.

But personally, I think I’d start with something like this sequence:

– educate the community on not calling the police for people ‘loitering while Black’ or ‘Black teens are loud at the library’ or ‘Black kids are loud on the playground’ or ‘there’s a Black person chatting on his phone near my garage’ — I’m pretty sure our police hate those calls too.

– re-assess the right size of the police force for Oak Park (using strong and appropriate community comps, not giving into fear of our Austin neighbors)

– strengthen ties with Austin, and community partnerships like the Youth Interventionist Task Force, aimed at reducing gang involvement for teens

– if our police force is oversized (and I think we almost certainly are), try to assess where current police might be transitioned into other positions (here I’m getting a little speculative, since I’m not really sure how possible that is — can you take a beat cop ten years into the job and incentivize him or her to transition to a different line of work? I’m super curious how many of our police, if offered the opportunity to give up the ‘dealing with crime’ part of the job, would actually be happy to train to do something else community-serving)

That’s what I have so far, as an outsider who hasn’t really studied the problem yet. Hope this is a little helpful to those who will actually be working on it in the next four years. 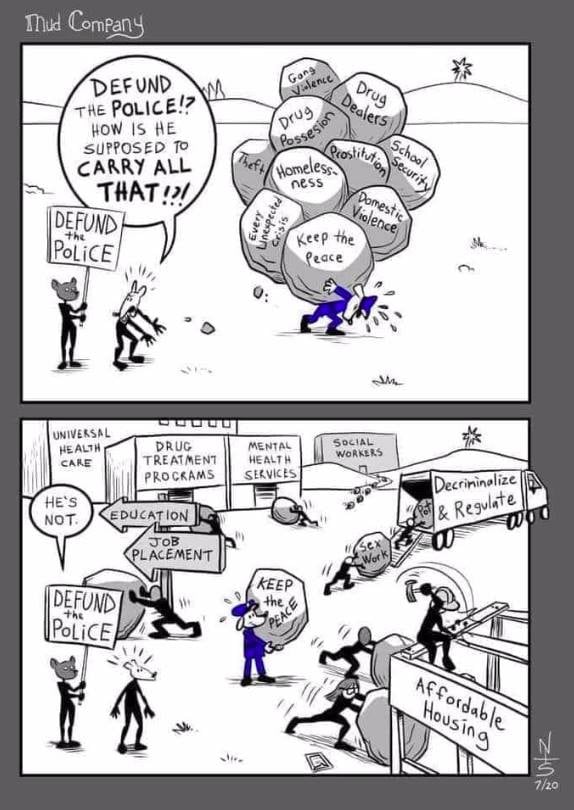