Would love your input on some questions at the end of this.

My Patreon is almost at $500 / month right now, which is great, because it’s a very steady source of income. My secret goal in the next year (I guess not so secret) is to get it to $1500 / month, at which point, it’ll be enough to replace one of my classes.

My department chair is looking into whether in 2022-2023, I can drop down to 3 classes / year instead of 4, which would open up a lot more time for writing books; I would really love that. Teaching is great, but it’s also endless — there are always more students you could be teaching. There are only so many books you’ll get a chance to write. But we really do need my income to pay the bills. So all of this is in aid of making that happen.

I’ve had a lot of fun making items for Patreon this year, but I do think I need to think a little more carefully about how I do it in 2021. Production capacity is a real issue — they just take a lot of time, making everything by hand, and while I want to do that while I’m developing items, it doesn’t scale well for just me when I’m shipping them to a lot of people (and even 25-50 is a lot, in this case).

I start losing too much time from writing, is the big problem — even this week, I’ve had to take a few extensions on George R.R. Martin’s Wild Cards story (which pays quite well), in order to get the boxes put together and shipped. When I’m writing on a contract these days, I’m usually making something between $50 – $100 / hr (mostly depending on how much rewriting the thing needs). So it makes sense to hire out as much work as I can at $25 / hr.

Part of the issue right now is the pandemic — I couldn’t have Emmanuel Henderson and Stephanie Bailey over here helping with packing and shipping, which would have saved some significant time. I don’t *think* it would’ve made sense to have them swing by, pick things up, take them home, and wrap / ship from there — although I’m not quite positive of that.

But I do think that the bath products at least, we’re going to try having Stephanie help with production. She likes making them, she’s good at it, and I can still have the fun of coming up with scent / color / mold combos. (I’m planning to experiment next week during holiday down time on the unicorn garden theme, and that part will be much fun.) I’m also loving the pattern design, so more of that, which I think is going to find its way onto stationery more as well as fabric. Little notebooks for writers, perhaps? Stay tuned.

We’re also going to start thinking about sweets production, although that’s a little more complicated, as it requires getting appropriate licenses / training for everyone who’ll have their hands on the food, and possibly renting space in a commercial kitchen — that may have to wait until summer to sort out. The summer box is also kind of light on food stuff anyway, since a lot of food treats don’t ship well in heat. So really, maybe we aim for September or even December on that?

But in general, I’d like to come up with something for Patreon that’s more scalable, which means digital rather than physical rewards. I had planned to write stories for it, or release RPGs, and somehow neither of those quite happened this year. Need to reprioritize a little bit around that, because while the treat boxes are great, I think I need to add a digital-only subscription option too. (Stephanie, maybe we should sit down in January and make a bit of a plan on this?)

All of which raises the question of what to put in the digital tiers, so this is where I could use some advice / thoughts / requests? If I were sending you something digital monthly (say, $5 / month) or quarterly ($12 / quarter), what would you like to see from me? Here are some possibilities:

– garden photos (which also opens up the possibility of themed tiers, like a garden tier, which had garden photos, essays, poetry)

These are all things I’m planning on working on anyway in 2021, but if there’s something that people would particularly like to see, now is your chance to holler for it to jump to the head of the queue.

The big plus side for me in sending out drafts this way, of course, is that it also motivates me to actually, you know, draft things. And once drafted, it’s usually not that far to a finished project, ready to send out to editors (or release myself). Efficient!

(Photo is of my jasmine, which has decided to bloom like crazy right now. I can never predict when it’s going to bloom, but I’m always delighted when it does. The living room smells incredible.) 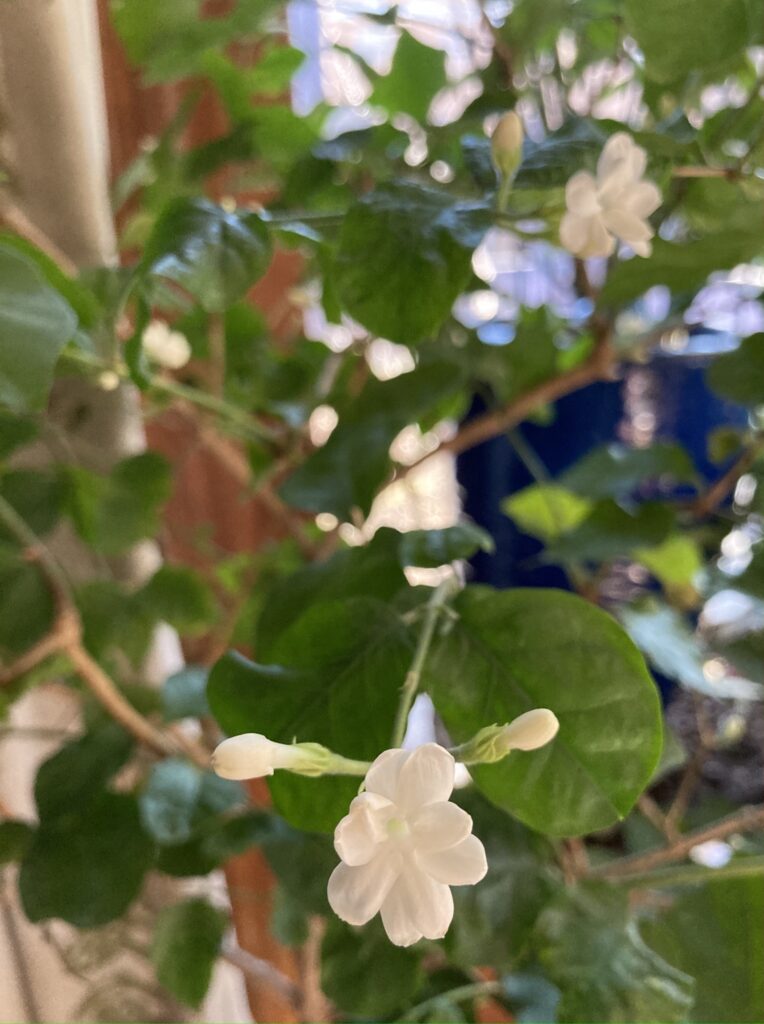