10 morning thoughts, the day after the election started (it ain’t finished yet):

1. The Philadelphia vote-counting livestream is both immensely soothing and brilliant — THANK YOU to whichever social media person or election official decided to put it up. Particularly at a time when some are already questioning legitimacy, this is what the republic needs — reassuring footage of hardy election workers, doing their job. #everyvotecounted

2. I was really shocked when Hillary lost in 2016. In retrospect, I shouldn’t have been, but I wasn’t paying enough attention to what the pollsters were actually saying; I dressed myself in suffragette white and took Kavi with me to vote for our first woman president. That loss was crushing, and I think as part of that, I’ve been very cautious about letting myself hope again.

3. In particular, I didn’t hope because up until a few days ago when I finally let myself even look at recent polls, I was actually pretty sure Trump was going to win, because incumbents almost always do. That’s just overwhelmingly true — it takes something drastic to unseat an incumbent, and I hope people remember to factor in that weight in their post-election analyses.

4. If you didn’t read Heather Cox Richardson’s post from last night, about how we got here with the electoral congress, please do. It is essential knowledge for any American voter. Likely of interest to those outside America too, wondering how we got ourselves into this mess. https://www.facebook.com/heathercoxrichardson/posts/2486810801462971

5. One thing I learned about in the last election was how Big Data has made the ‘race to the center’ FAR more effective than it ever was before. These days, campaigns that are trying to grab as much of the electorate as they possibly can (see also ‘Hoteling’s Law’ on Wikipedia, if you’re not familiar with this mechanism), can do so with tremendous precision. As a result, we get very close races, and we’re going to keep getting very close races, anywhere the candidates have access to the money that lets them do that research and crunch those numbers. So when you see close to 50/50 voting that makes it seem like “we’re far more divided than we’ve ever been,” that’s not really accurate. It’d be more accurate to say, “politicians have gotten much better at finding the midpoint, and positioning themselves there.” https://en.wikipedia.org/wiki/Hotelling%27s_law

6. Which doesn’t mean we can’t have a landslide, or even just a clear tipping over to one side or the other. But it takes extraordinary circumstances, the sorts of major events that politicians can’t just ride easily, reframe their positions and narratives, and adjust around. Given the incumbency factor, I think likely the only reason Trump wasn’t guaranteed a second term was due to the pandemic and his administration’s mishandling of it.

7. I ran across someone yesterday who said the problem with liberals is that we can’t believe that populists are actually popular. I mean, I don’t think that’s exactly the problem with liberals, in the sense that even if it’s true, I don’t think that stopped many many of us from fighting tooth and nail for votes this election. But I do see it in last night’s despair, a sort of incredulity that people (relatives, friends, neighbors) actually like Trump, despite everything. That’s something we all have to wrap our heads around. The man is popular. He’s selling something that a lot of people want to buy.

8. Worse, Trump’s supporters are going to be willing to overlook a lot of stuff they don’t like, in order to get the the thing they do. That part’s just human nature. Almost all of us do that with our friends, our relatives, our politicians, to one degree or another. You really have to push people to the breaking point before they’re willing to say, “No, I just can’t stomach that,” and walk away.

9. Exit polling is already showing that Latino men and Asian men went for Trump in pretty large numbers (that’s why Miami-Dade numbers skewed the way they did, the Cuban male vote). A lot of men like his brand of machismo; it resonates with them. Toxic masculinity is a drug, and we’re going to be dealing with that legacy for a long time. Racism isn’t going away quick either.

10. You’re tired? I’m tired too. Take your meds, hydrate, get some exercise today, eat something other than Halloween candy, something good for your body. Watch what’s happening to you when you obsessively track election results, and if you’re doom scrolling and doom posting, WALK AWAY. Live to fight.

My son just told me that his party lost his school election. Anand was pretty involved in crafting his party’s platform, and he’s a little bummed, but not too sad because “I only have to go to this school for a few more months, so I’m not going to have to deal with them for long anyway.” Nice rolling with the punches, kid.

I walked out to the shed to work this morning, and was greeted with a river of autumn crocuses that I don’t even remember planting. As if they were saying, “You thought it was over? Don’t count us out yet, my friend.” 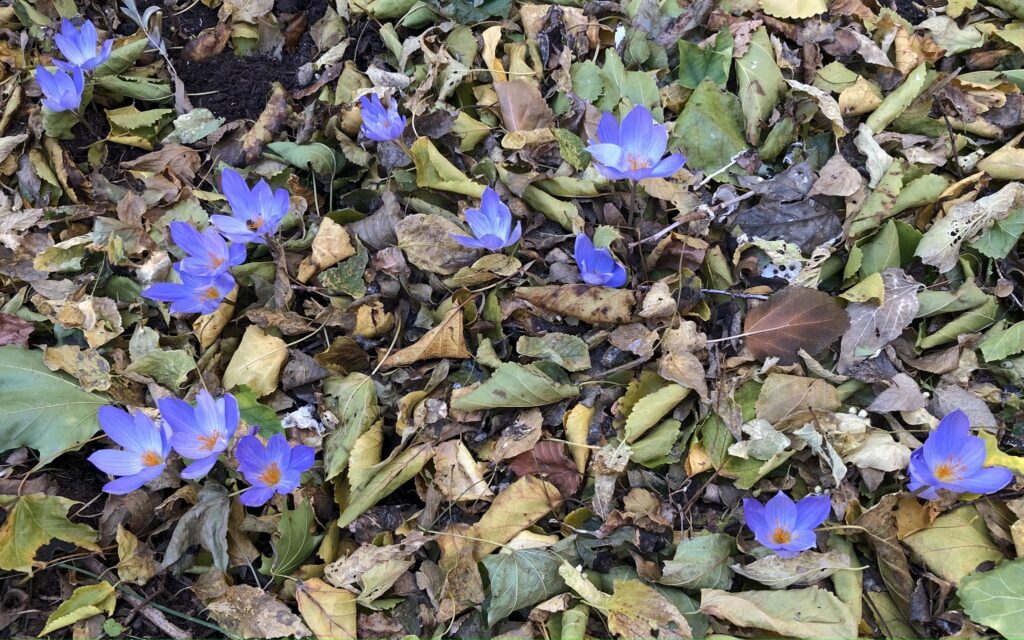