Clearing out an area for Anand’s e-learning, which starts on Tuesday; all those bins of Serendib stuff are headed to the basement. This is going to be his work station for the fall, our eat-in area in the kitchen. (Which has mostly been taken over by craft supplies for the last several months.)

The plan is for Kavi to work in the dining room (two rooms away, same floor) during the morning, while I’m mostly out in the writing shed, so if there are small things he needs help with, he can hopefully ask her before coming out to ask me, or going upstairs to ask Kevin.

Then after lunch, I’ll come inside to work in the afternoon, be more directly available to help him, as well Kevin, and Kavi can go upstairs for the second half of her day; she’s got a work area set up in the attic playroom.

I’m hoping this arrangement will let Kev and me do the work we need to do, let Anand get any help he needs, and still give Kavi enough time to do her own work and enough alone time for the introvert side of her.

We’ll see — we told the kids we’re trying it for two weeks, but if it doesn’t work, we’ll regroup and try something else. We’re still braced to pull Anand out for the fall if we need to and homeschool (mostly unschool) instead, but hoping to avoid it. Fingers crossed. 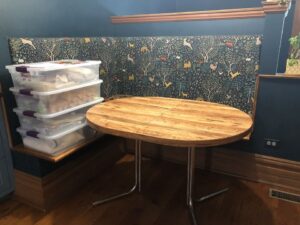