This is a ramble about my small businesses and making money. I had a long conversation with Kevin yesterday about what writing projects I should work on this fall. So many possibilities — I need to narrow it down to both a) what might pay well soon, and b) what’s interesting to me right now. As he said, he doesn’t think I do very well just picking writing work based on commercial aspects — I get super-cranky and resistant to actually writing if I’m not at least somewhat excited about the project.

But I do need to think about the money a little, because if I want to keep paying my Serendib Press staff (putting in something like 40-80 hours / week on average, on things like social media and book design and video / podcast production and order tracking), I need to justify that with actually earning, y’know, money.

Writing novels on spec that might not sell for years doesn’t support that. (I probably should have applied for the government paycheck protection funds, but I had the money in hand for the summer at that point, and it seemed like others needed it more. If they open up a second round of it, though, I think I will; it’ll definitely help us get through the fall.) We’re trying to avoid Kevin and me loaning the writing business a few thousand dollars for the fall (though we will, if we need to.)

Unfortunately, I still don’t know yet what’s happening with cookbook sales. Sigh. The June statement from Mascot had something like $8000 in sales from Amazon, but Amazon takes several months to pay apparently, and I can’t count on that money because I don’t know how many returns there were. We’re due for another quarterly statement any day now — maybe it’ll come with cash-in-hand, but I just don’t know. Business budgeting in the book industry — complicated! I am not sure how bigger (small) presses manage it, given the variability that the possibility of returns brings in!

Stephanie HAS been working on designing Vegan Serendib, so once that’s ready (we’re planning a second ebook edition, much bigger than the original sampler, plus POD — if Stephanie’s up for it, I’m now thinking we should do both paperback and hardcover). So at some point, maybe within a month, we’ll start opening up orders for that? That’ll help with cash-flow a bit. And Vegetarian Serendib and Gluten-Free Serendib are also in the works. Might manage to actually get all three done this fall? We’ll see!

I do also have some money coming in from things like masks, but with the start of semester harriedness, I’m a little behind on mask production. Going to try to catch up this weekend on the last July orders, then probably need to sew a lot next week to really get back on track. (Kiwi Carlisle, your order is so late, I threw in an extra Enterprise mask in apology. Enjoy!)

I don’t want to promote those any more until I’m caught up; I’ve just asked Stephanie to adjust our order page to indicate I’m now five weeks out on orders. I can’t sew too many hours a day without my back hurting, so there are limits to how much mask production I can do in a hurry. It’s nice to have a change from computer work, though! (I am continuing to watch Lucifer for sewing company right now, though I admit, for me, the lead guy is pretty much entirely carrying the show. I watch for him, because he is fabulous.)

I also need to start making items for the September Patreon treat boxes — I might make some soaps later today. I have these new pumpkin molds that are SUPER CUTE and I’m dying to play with them. Have to sew more masks first, though.

(Most of this week has been teaching for many hours a day — so many videos, so much logistical stuff to track — but I am caught up for the moment, yay, so taking today mostly off from teaching. I had one phone call with a student about an independent study, have a department party at 4, and I’m keeping an eye on the Slack boards to see if they have any questions.)

So back to straight writing — yesterday I sent out queries for two game-writing gigs that might come with advances fairly soon; I’m also planning to finish up some short stories and send those out, which also come with cash up front, should they sell. (They generally do, though sometimes it takes a few rounds to find the right home.) I have two Wild Cards stories in progress; those will bring in decent cash when they’re done.

I MIGHT also go back to working a little bit on the other Jump Space universe novel, mostly because it’s half-drafted, and that’s nagging at me. And I’ve started thinking about it again; I had a scene pop into my head when I was falling asleep last night, and I want to get that down, at least. We’ll see.

And of course, it’s possible my agent will read the novel I sent him on Monday in the next few weeks, love it, and come back to me saying he’s confident we’re going to sell it soon for a hefty advance, and he loves the trilogy possibility, and I should start working on book two immediately — in which case, all of this gets thrown in the air and we re-prioritize. Huzzah. No guarantees, though.

This is not a job for those who like their days predictable and orderly. 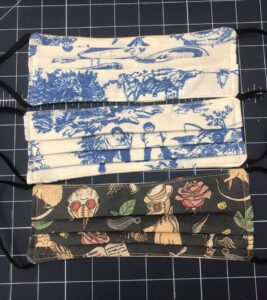