The power went off around 5-ish yesterday, after the storm, and the kids were a little stressed when they realized that meant the internet was out, AND their devices were going to run out of charge. They were reassured when I told them that if it started to really bother them, we could go out to the car and we could plug in a device there and charge it, but it was also a little startling just how much it bothered them.

We’ve all been relying on devices a lot to help us cope with pandemic, I think, and I think they particularly help the three of us with ADD — instead of getting impatient with someone else’s slowness taking a turn, it’s easy to distract yourself with checking Facebook. But developing patience is a good thing; maybe we’ll start easing into device-free time in a more organized way. (We’ve tried that before. It comes and goes in this house.)

With the power out, we had dinner (which Kevin had already made) and then played a game of Lanterns, which it turns out is a little hard to play by candlelight for aging eyes — telling green and blue apart wasn’t so easy. It was still light out, but grey and stormy, so pretty dim. When we finished playing, Anand and I went out to the pool for a bit; he swam and grabbed up leaves from the bottom, and I walked around, scooping a ton of twigs and leaves from the top. Mosquitoes finally drove us inside, but we got it pretty clear; should be good for swimming today.

Once inside, I lit kazillion candles and settled down to read by them and Kindle light, accompanied by a bit of melting ice cream. I did offer to read something to Anand if he got bored, but he decided he wanted to lie in bed and tell himself stories in his head. “I’ve got one more scenario I want to get through first.” Rich inner life, developing. It should serve him well in this world.

Around 9-ish, the power came back on, and before I even quite noticed it, I heard Kavi shrieking from upstairs, “We made it!” She came dancing happily down to make sure we knew that civilization had returned, and then said, “I’m going to go downstairs and open the fridge and eat something. I don’t even know what I want!”

I was relieved to have the power back too — I have enough work I really have to get done that I was going to have to probably pay Verizon to let me hotspot my phone to the laptop (they’re charging for that now, jerks), just so I could send things out from my computer. And my sewing machine is working again, so I should be able to get a few mask orders out today. Sympathies to those who still haven’t gotten power back! If you’re local, holler if you need a few candles tonight; we have plenty.

We don’t cope so well with restrictions sometimes, we humans. But for a little while, it was nice, playing a game with the family, walking around the pool, lighting all the candles. 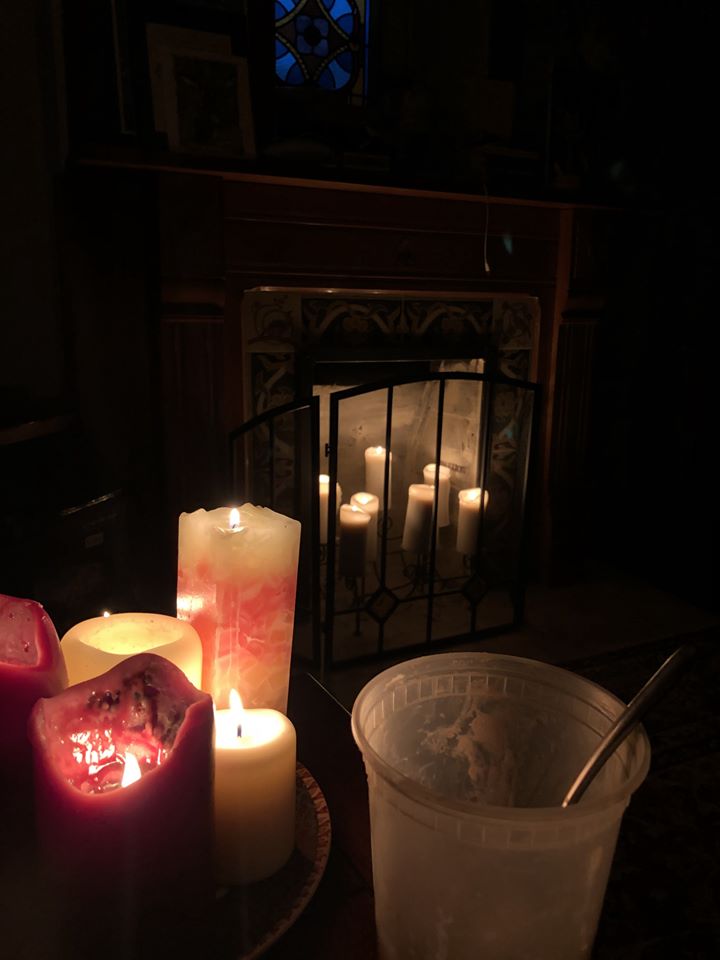