Who wants to do science with me? Specifically, I need to define out a little more of my planet of Kriti. Parameters:

– this is a colonized planet in the process of being slowly terraformed with no sentient local life
– I’d like there to be deer-like creatures, and bugs, and lizards, and plenty of flora, but not monkey/ape-like creatures
– the colonists arrived three generations ago (so about 60 years, roughly)
– there are three domed cities on the planet
– the domed cities are fairly arid (think Mediterannean plants can grow fine)
– the area outside the domes is low on oxygen — breathable, but not that comfortable. Lots of people do live there, but only poorer folks who have to work in the agricultural regions. I’m picturing it being a little harder to breathe than Salt Lake City or Denver. They use oxygen masks after exertion, or if they’re sickly / young / elderly.
– I’d like the overall temperature where the humans settled to be on the slightly warm side, but basically human-comfortable — the planet needed to be reasonably attractive to South Asian colonists, and they’re now doing things like biking around the fields in their saris, so imagine that climate (but I need to figure out if they’re at the equator, or near a pole, or in between)

Any problems with the world-building so far?

I’m now at a point where I need to map out my capitol city, which is mostly taken up by a major university. And I realized I need to know where the water is, since cities have historically been built on water when possible (for lots of reasons). Which made me realize I wasn’t sure how much water was on my planet overall. (I am clearly of the world-building school of ‘I’ll figure it out when I need it’ — well, now I need this bit).

I *think* there’s a lot of leeway there? I mean, Earth didn’t have a lot of oxygen before the Great Oxygenation Event, and it had plenty of water, so the two don’t necessarily go together.

I also need to lock down where the cities are in terms of location on the planet, I think — near the equator, for example? Near each other? How near? One of the smaller cities is a mining settlement, so probably near something mountain-like, which might be quite far away?

The other domed city is probably not so far from the capitol — it’s a robotics & shipbuilding research facility, essentially, and is domed to help control the overall environment for the delicate electronics work they have to do. (Is that goofy?) The main commercial port is in the capitol, but maybe there’s a secondary one here.

(I am hoping that some of you reading this will find it fun to do my work for me, and will bring the science.

(Image by Jack Kotz, for The Stars Change, my novella set here. That’s part of the University pictured, in the capitol.) 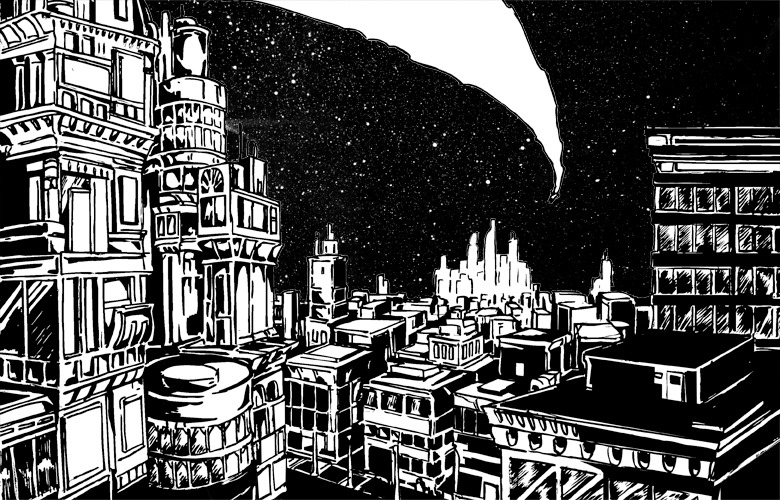