I was talking to my therapist yesterday, and I came on the call asking if she had any tricks for avoidance, because I’ve been wanting to work on two novels for six months and haven’t touched them. Every day, I think about them, and then don’t touch them. I do ALL THE OTHER THINGS instead. Why am I a little energizer bunny of productivity? Because I am frenziedly avoiding the novels, that’s why. (Even right now, I want to go make a batch of jasmine tea for treat boxes, instead of writing. Making tea is so much easier.)

Therapist said, per other conversations we’ve had, that I seem to be good at analyzing structural deficits in situations (like what led me to start Strange Horizons, and what I’m currently starting to build out for free creative writing & lit. instruction at the Portolan Project). She asked me to apply that same structural analysis to the novel writing problem.

And of course, once she framed it that way, it was actually pretty easy to articulate what I needed — I honestly knew it already, because I’ve been in this place before. When I wrote Bodies in Motion, I was getting up at 4-5 a.m., while the world was asleep, and that let me get deep work done. With kids and a house and all, I need that early morning time even more now. I knew it, but she made me lay it out structurally, put it into words.

Our current family lifestyle makes that impossible, though. So that lifestyle has to shift. I’ve got about one month until school starts, so I’m making some changes around here. They’re kind of dramatic, we’ll see if they stick:

– we’ve shifted up Dr. Who-family-watching-with-popcorn time to 7 p.m., so we can be done by 8. There’ll be some slipping some days, no doubt, but the hard stop is 9 p.m.

(SIDEBAR: I was in a meeting a few days ago about cultural practices, and there was discussion of how a ‘hard stop’ is such a white Western kind of framing, which makes me laugh, because I am personally a little obsessed about timeliness and HATE being late, mostly because my mother was perpetually late to everything…but maybe also because racism and growing up as a brown kid assimilated into white educational and professional communities, timeliness became part of my identity…but anyway. And now I’m feeling like I was being unjust and maybe a little internalized-racist towards my poor mother.

– I’m trying to get to sleep by 9 p.m. Eep. That means shifting my internal clock about two hours earlier. Will likely take a few days of grogginess and setting alarms before that sticks. Unpleasant.

– I’m aiming to get up by 5 – 5:30, and to keep weekday mornings 5 a.m. – 11 a.m. clear for writing; nothing else scheduled then, not even morning walks with Anand. Those are on hiatus for a month, though we may sub in with after-dinner walks, and we definitely plan on pool time daily, so exercise should continue.

– I don’t expect to actually write solidly in that time — there’ll be some garden puttering, maybe drawing, probably reading, etc. A minimum of Facebooking, hopefully. I just know from past experience that if I don’t have big blocks of time set aside, it’s almost impossible for me to go deep into a project.

All of this is in service of getting at least one novel revision done in the next month, and ideally, also finishing drafting a second novel (which is about 50% drafted right now). When school starts, I want to be sending two books to my agent. It’s an ambitious goal, but if I don’t get at least one of them done and out the door by end of August, I’m going to be furious with myself.

Once you say it out loud, it’s easier to actually commit to trying to do it. So I’ve talked to Kevin, and we’ve talked to the kids, and the family’s on board with Mommy’s new bedtime plan. Of course, all of this will change again in a month when teaching and the kids’ e-learning starts up, but for the next four weeks, here we go. I’m going to try to be very stern and strict with myself, here in my little monk’s writing cell.

It can’t be all stick and no carrot, though. Getting up to an alarm when I don’t have to is a little painful!

So I promised Kavi that if I actually manage to start work on the novel today, we could make chocolate Totoro cookies (we made the dough last night) and eat them while watching the movie together this afternoon. So if you see pics of Totoro cookies later, you’ll know I actually opened the novel file. I’m going to go do it now, actually. I want cookies. 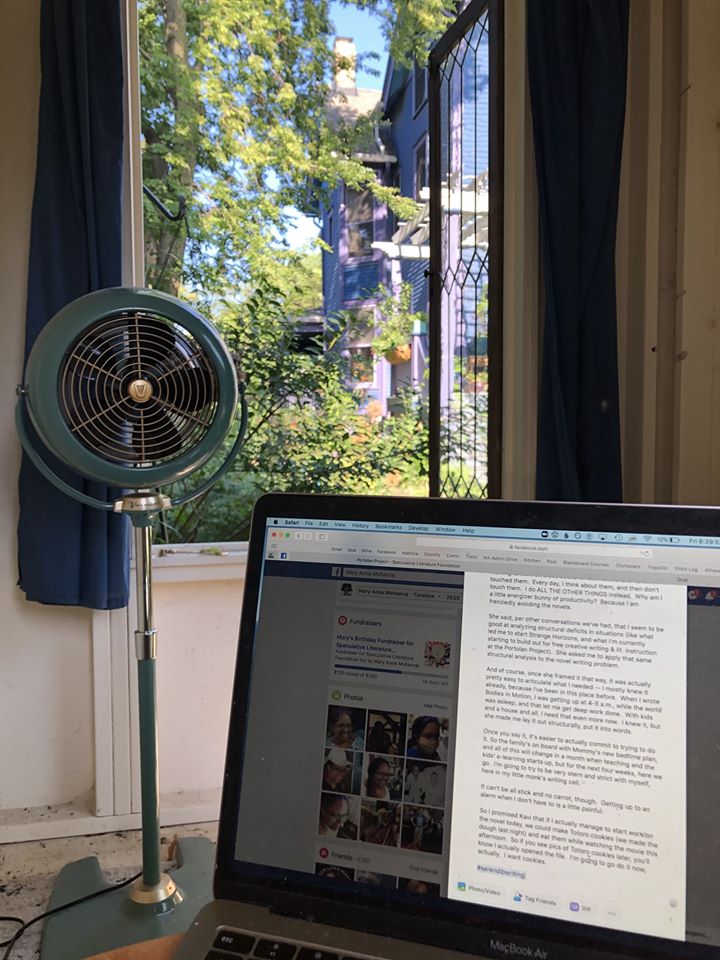