I think we should retire the word ‘garish,’ except if we’re using it to indicate, ‘here is a character who is an unrepentant snob.’

I was listening to “Let’s Argue About Plants,” the podcast from Fine Gardening, and mostly, I like this garden podcast because they get pretty in-depth about plant characteristics, talking about things like how variegated plants tend to be less robust, so may well disappear in your garden after a few years — this level of detail about perennial plants is my jam.

But they were talking about some flower and the guy kept talking about how it was orange, but not a ‘garish’ orange, more of a burnt orange, a subtle orange, the kind of orange that isn’t overpowering, and it just makes me a little crazy. Because bright orange is a tropical sort of color, like bright pink, and there is no reason not to give it a complimentary term for its brightness — like ‘brilliant’. Brilliant, dazzling, vivid, intense, ablaze, luminous, radiant.

Gardeners talk about ‘brilliant blue,’ but somehow ‘brilliant orange’ just isn’t a thing. And I’m not saying that the editors are racist. But I’d say that we’re all swimming in a racist soup, and when you dismiss bright oranges and pinks and the combination of them as garish, gaudy, lurid, flashy, brassy, brash — well, if you look up synonyms for garish, one of the ones you get is ‘tasteless’. And we should be suspicious about who gets to decide what is tasteful and what isn’t.

I’m NOT saying there’s no such thing as a harmonious composition. There is! But harmony isn’t only found in muted tones. So that’s my garden rant for this morning — let’s decolonize our decorative language, and enjoy these brilliant orange daylilies. They’re radiant! 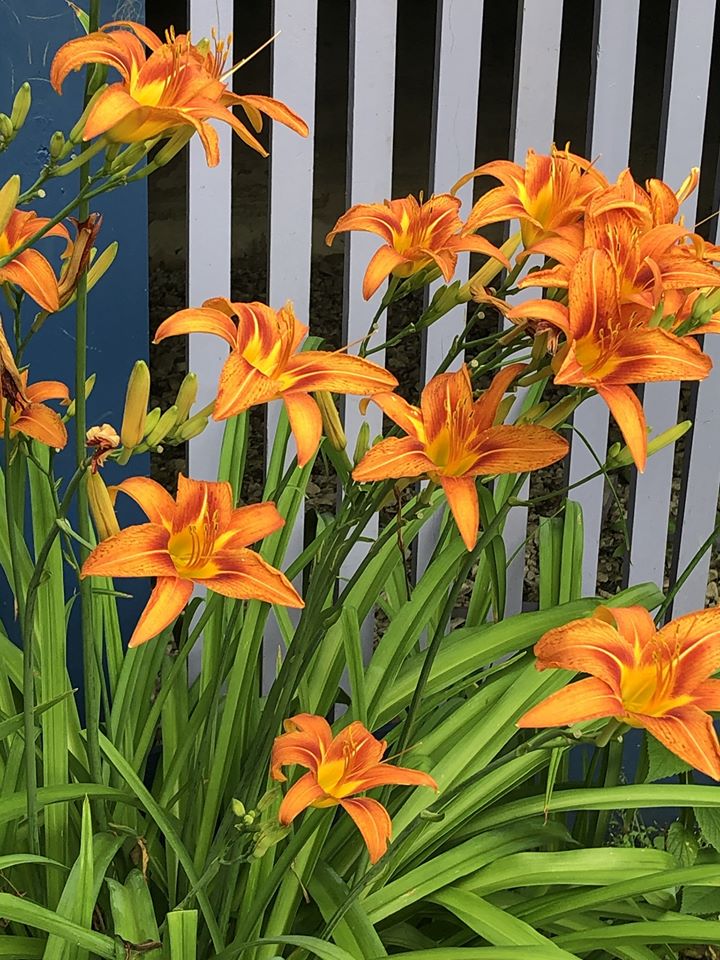