Somehow today ended up being a very mask-sewing day — I think I knocked out 10 masks over the course of the day, maybe 3 hours of sewing total, which is a lot for me. (If I remember to sit up straight while sewing, it turns out that I can sew for longer before my back starts to hurt. I’m learning all kinds of things about sewing these days…)

I’m working through the backlog of orders; I think about one more week should get me through them all. Then I’d like to do one more big batch of donated masks for the librarians, which will maybe take another week of sewing, and then I’m probably going to take a break from sewing masks for a while.

But I do love these. I made them as a fan gift! 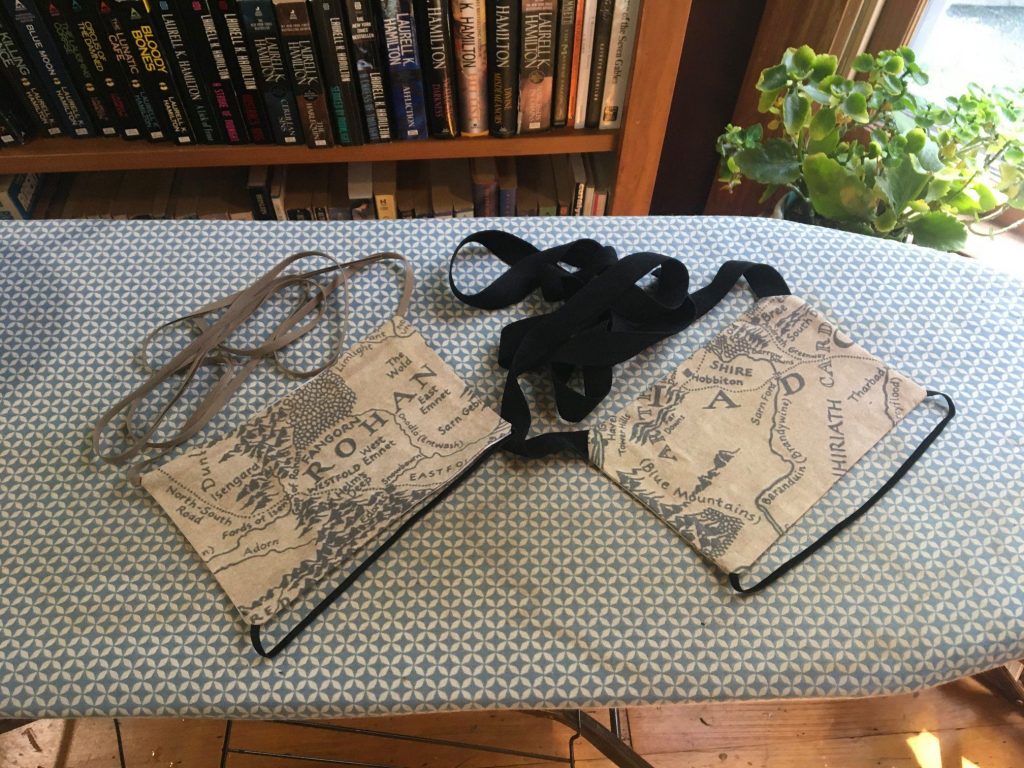 People give me fan gifts sometimes, little things they bring to signing lines and such, very sweet. Occasionally I’ll have a card or a flower dropped at my doorstep. I have some origami butterflies propped up on the bulletin board in my office; those were a fan gift. Mostly I don’t tend to give them myself, because I don’t think of doing so at a reasonable time. I mean, I’d like to shower Bujold in fan gifts, but I wouldn’t have any idea what to get her, and I’m not sure when I’ll see her again anyway.

This one, though, I think is pretty good. It’s going to Emily and Kumail, whose podcast (Staying in with Emily and Kumail) has brought me a lot of comfort and laughter in the last two months, both sorely needed. I know from the podcast that they’re LotR fans, that the series is important to them in some relationship-y way that I don’t know the details of (and don’t need to).

I also know they’re assiduous about mask wearing, especially since Emily lives with a medical condition that leaves her immunocompromised and needing regular infusion treatments at the hospital. And this fabric is rare and hard to get a hold of — I’m pretty much out at this point, I think, aside from the few that I have set aside for earlier mask orders.

To be particularly geeky about it, I did the one with the ribbon closer to Emily’s hair color featuring the Riders of Rohan, because she’s the adventurous one of the pair. And I did Kumail’s with a black ribbon (he has black hair), featuring the Hobbiton and the Shire, because he’s the one who frets about her safety, and wants them both to just stay safe at home!

Hopefully they’ll like it. (I don’t think they’re on FB, so they’re not likely to see this here…) It makes me happy to send it, anyway!