I watched “Juliet, Naked” on Hulu yesterday while sewing, and it was quite nice. I thought it was going to be another cheesy romantic comedy (which would’ve been fine for sewing company), but it was better written and more subtle than that, often very funny in a dry, British sort of way. Cross-continental romance, fame and musicians, but mostly human character drama, very sweet. 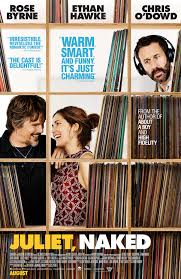 I also recommend Dickinson on Apple TV+ (free to watch if you have an iPad, iPhone, etc). A smart and funny mini-series (about 10 episodes?) about Emily Dickinson — part of the fun is that they have Emily’s generation talking like modern teenagers, while the adults speak in the vernacular of the time. It works surprisingly well. Nice queer content, witty dialogue, obsession with death. I kind of love how each episode takes one of her poems and plays with it, including how they scribble it across the screen. (Thanks to Charlie Jane Anders and Annalee Newitz‘s _Our Opinions are Correct_ podcast for the recommendation.)

I also watched The Morning Show miniseries recently on Kevin’s recommendation, also on Apple TV+. I didn’t realize going in that it was going to center on sexual assault, exploring the “Me too” movement, so there’s your content warning. They do give a content note on the episode with actual assault, so you won’t get that unawares.

I think I was expecting something more along the lines of Aaron Sorkin’s _The Newsroom_, and this is not that. But that said, if you’re up for it, this was well written and well done, and Jennifer Aniston and Reese Witherspoon both surprised me, actually, with their excellent performances.

I’ve been fantasizing a bit lately about trying my hand at screenwriting a little. I was trying to talk Roshani into writing something with me, just to play with it, figuring that I could talk Ingrid de Beus and Devi Bhaduri into telling me everything we were doing wrong.

I spent a few hours yesterday doing cultural consultant work for a script featuring a Sri Lankan character, and that was fascinating. Mostly I was there to make sure they didn’t make any big blunders and to suggest ways to weave more Sri Lankan cultural notes through the piece, but I couldn’t help doing some developmental editing as well, thinking about ways to heighten suspense through a different presentation of the material, time-wise. Hm.

Would like to do more of this kind of thing, I think. We’ll see what the universe offers, but in the meantime, I feel very justified in watching a lot of TV.