This afternoon’s masks go to a two-doctor husband/wife couple, her adult brother who’s staying with them during social distancing for a few months unexpectedly, and the toddler daughter. They also have an infant in the house. The daughter likes sparkly pink — I didn’t think sparkly would survive lots of washing, but Kavi said these butterflies made it look sparkly, so that will hopefully do. Otherwise, I would have bedazzled the heck out of her mask! Think good thoughts for them, okay? It’s nerve-wracking for all the doctors I know who have to go in to the hospital and then come back home to their families. 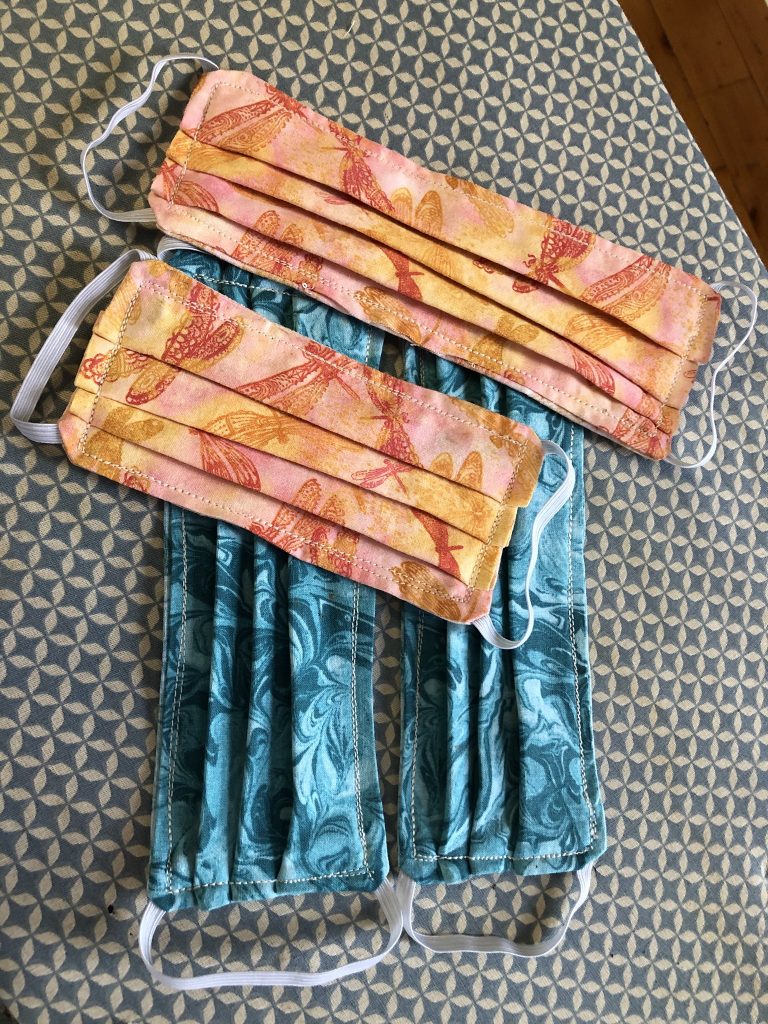 Sewing accompaniment was first an episode of the “Milk Street” podcast, which was fine, but I think I like Christopher Kimball better as an editorial voice than an actual voice — something about the way he talks about food and culture kind of rubs me the wrong way. So I’m not recommending that (though I’ll probably listen to at least 1-2 more before I actually give up — it’s not fair to judge anything on the first episode), but I *am* recommending the “Home Cooking” podcast with Samin Nosrat and Hrishikesh Hirway, which was somehow immensely comforting.

Part of it is Samin’s voice, which is like a warm hug, and also her enthusiasm about eating, and especially her pragmatic and sensible approach to cooking at home during a quarantine. She got so excited when they had three questions about frozen vegetables and it just made me smile. I love her. There are only two episodes so far, but I hope they do lots.

I think I haven’t recommended this yet, but I’m also all caught up on the three episodes of “Staying in with Emily and Kumail.” You may know them because Kumail told their story in the movie, _The Big Sick_, which I watched with Kevin the other night (and got all sappy, yes) — it’s an interracial romance, and Kumail came from a Pakistani American family that expected him to have an arranged marriage, so all of that is very familiar to me.

But then (and this isn’t really a spoiler, given the title, etc.) partway through the movie, Emily gets incredibly sick very fast. In real life, obviously, she survived, but she is still living with a condition that means they have to self-quarantine periodically, so they decided to do this podcast (all funds from ad sales going to coronavirus-related charities) about techniques for getting through staying in.

Now, they don’t have kids and they work from home, so this is mostly relevant to those in similar positions, who might be going stir-crazy, but Emily was a therapist before she became a writer, and she offers various thoughts and techniques that might be helpful to many. Mostly, though, I like listening to them. They’re pretty funny, their interplay is very sweet, and it makes me smile.

That should be a whole podcast category: podcasts that make you smile. I nominate “Home Cooking” and “Staying in with Emily and Kumail.”