Thanks again to folks who came out to alpha-test my first RPG. It went really well, I think! 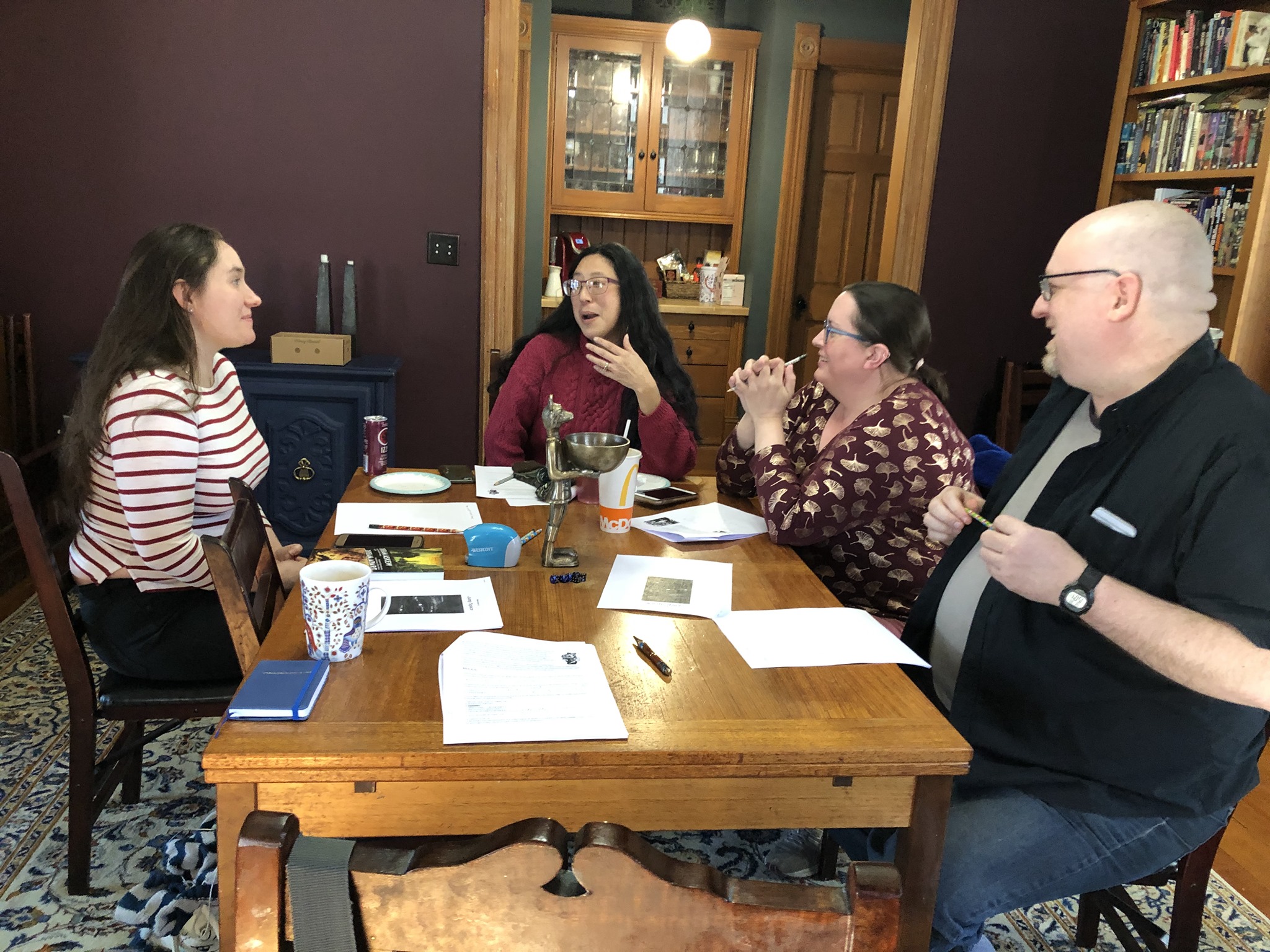 Benjamin Rosenbaum‘s game, Dream Apart, is about a marginalized community in the shadow of a majority. Mine isn’t quite that — I was more interested in exploring how everyday people create family (found or otherwise), and how we try to deal well with each other in the shadow of larger-scale conflict, even war. That’s been a major theme of my work throughout, from my mainstream Bodies in Motion to the SF stories in The Stars Change, etc. I’m really loving seeing it played out in game form.

Will play-test again next month, April 4 at my place; let me know if you’d like to join us. I’m recommending this be a 3-6 player game, but if we have a lot of people, we can always split up into two ships.

🙂 And I think Alex Gurevich and I will be play testing it at FogCon next weekend in Walnut Creek, if we can find 1-2 more people; let me know if you’d like to join for that!

Welcome to the Jump Space universe. We’re about 200 years in the future, circa 2200 as humans count years. In the mid-2050s, human spacecraft discovered a “black box” machine at the edge of our solar system; it proved to contain a gift: a prototype for a Jump drive, and a map which marked certain wormholes one could use to traverse a much wider galaxy. Jumping is always a little risky — a tiny percentage of ships never come out of Jump. But humans have been exploring for quite some time now, have settled various systems and set up different types of government, and have met lots of other species along the way.

There is much still to explore; the galaxy is vast.

In this game, you’re one of 3-6 people on a Jump ship. You’ve come together in a small event-hosting business that’s also something of a found family. Your quest is to keep your business and community going in a sometimes hostile universe — war has been brewing, with tensions rising between the ‘pure human’ movement, the humods (those genetically modified, either before or after birth, sometimes visibly, sometimes not), and the non-humans.

During the session, you’ll play through interactions with your fellow crew members, as you spend long stretches together in the close confines of a ship (travel between Jump points is fairly slow), and decide whether to stop on certain planets for work. You make your joint living through a combination of event-hosting (bringing in exotic flowers for a fancy wedding, for example) and general trade (Denebian crystal-dreams are hot right now on Tharsis).

Relationships are key: Some of you may be biologically related. Some of you may be dating or partnered with others of you (poly and queerness are norms in this culture; monogamy is also possible, or not being romantically or sexually interested at all). This is ideally played as an intergenerational game, with some of you as parents (we strongly encourage you to have children on the ship; the facilitator may play the children’s / parents’ roles if no other players are interested).

The question at the end of a session is always — does this community want to stay together as it is? Do members want to break off? Do you want to welcome others in? There are no right or wrong answers here, even if the community breaks apart at the end. 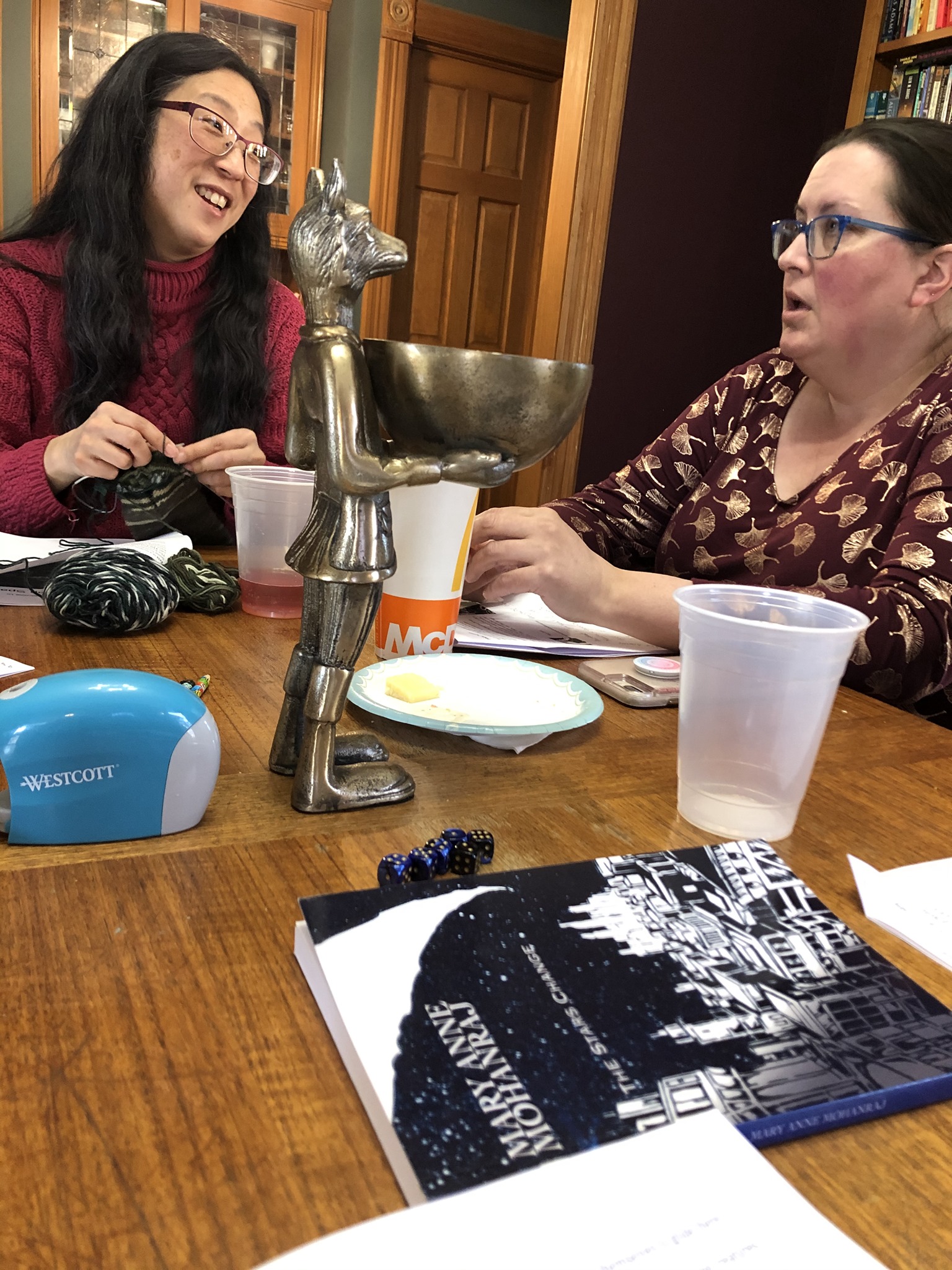 There’s a bunch more in the guidelines, but that’s probably enough to go on for this post.

The basic structure is a roughly 3-hr game that you can drop people into with no prep (at home, at a convention, etc.). My goal is to have the rules, background, and character creation take no more than 20-25 minutes, so that you can then dive into gameplay. We were able to do that yesterday, and have three solid ‘scenes’ in the next 2.5 hrs, ending with a satisfying climax scene.

I’m of course excited to have people playing games set in my Jump Space universe; it’s a sheer delight hearing them engage with my material. None of them had actually read any of my fiction in that universe, I think (maybe Heather, a bit?), which was great — I wanted to be sure that reading the fiction wasn’t a prerequisite to having a fun and satisfying game.

Part of what became clear during game-play was that I had skimped on some of the critical background. While people were happy to invent their own aliens and their own gene-modded and psi powers, a little guidance as to typical possibilities would have helped — I’m thinking maybe a set of six possibilities that people can either choose from or roll a die for, along with encouragement to create their own beyond that.

I think I’m also going to give them the option of either ‘free-form’ or more plot-heavy play. You can just roam the galaxy, hang out with your crew, see what happens. Or you can use some suggested scenarios as a starting point, and play out something with a clearer plot arc — choices to make, big consequences, leading to a climax, etc.

Players wanted to know more about how spaceflight and communications worked, so I needed to add just a line or two about that. And I clearly needed to add more background about the universe as a whole — government structures, relationships between species, and the emerging war.

I had them roll a die at the end of each scene to determine whether the war intrudes or not. That worked reasonably well, but I think for this particular iteration of Jump Space, where the theme is the war that is just beginning to emerge throughout the galaxy, some of what I’d like the game to explore would be lost if the day’s gameplay never touched on war.

So I think next time, I’m going to tweak that a bit — in the last ‘scene’ of the day’s play, I’m going to recommend that players do plan on having the war affect play. No dice roll, just assume it’s become significant enough to be inescapable.

Not necessarily in a big way — in the particular game we played, there were a few instances of anti-genemod ‘racism’ that the crew had to deal with (one of them had adopted some war orphans, little kids with visible modifications, which led to harassment); none of those incidents turned violent, but they could have.

It also turned out that the ship’s accountant had made investments in what she thought was a company rebuilding on war-torn planets, essentially a NGO, and then it was revealed that the company was actually war profiteers, contributing to the conflict in order to make more money. Now the crew will have to deal with that information — some know, some don’t. How will they react when they do find out? Will it break the crew apart?

Maybe the most satisfying parts for me were:

a) They all really seemed to have a good time — lots of invention, lots of laughter, lots of creative collaborative storytelling, building off each others’ efforts. (None of them really knew each other in advance, either.) Some of them were more plot-oriented, some more interested in acting their bits out, but it all basically worked, and people seemed engaged straight through the three hours.

b) They bonded as a crew! They want to play at least some of the same people next time, and I love that they’ve gotten so attached. I’ve given them ownership of their characters, and permission to go off and do whatever they want with them in my universe — write stories, draw sketches, build dolls, whatever. I didn’t anticipate that they’d bond so quickly to the characters and the crew, but I love it. They really got some of the community feeling I was going for.

And if this game ends up leading people to think a little more about how we create intentional community and take care of each other in a harsh universe, that would be okay with me. 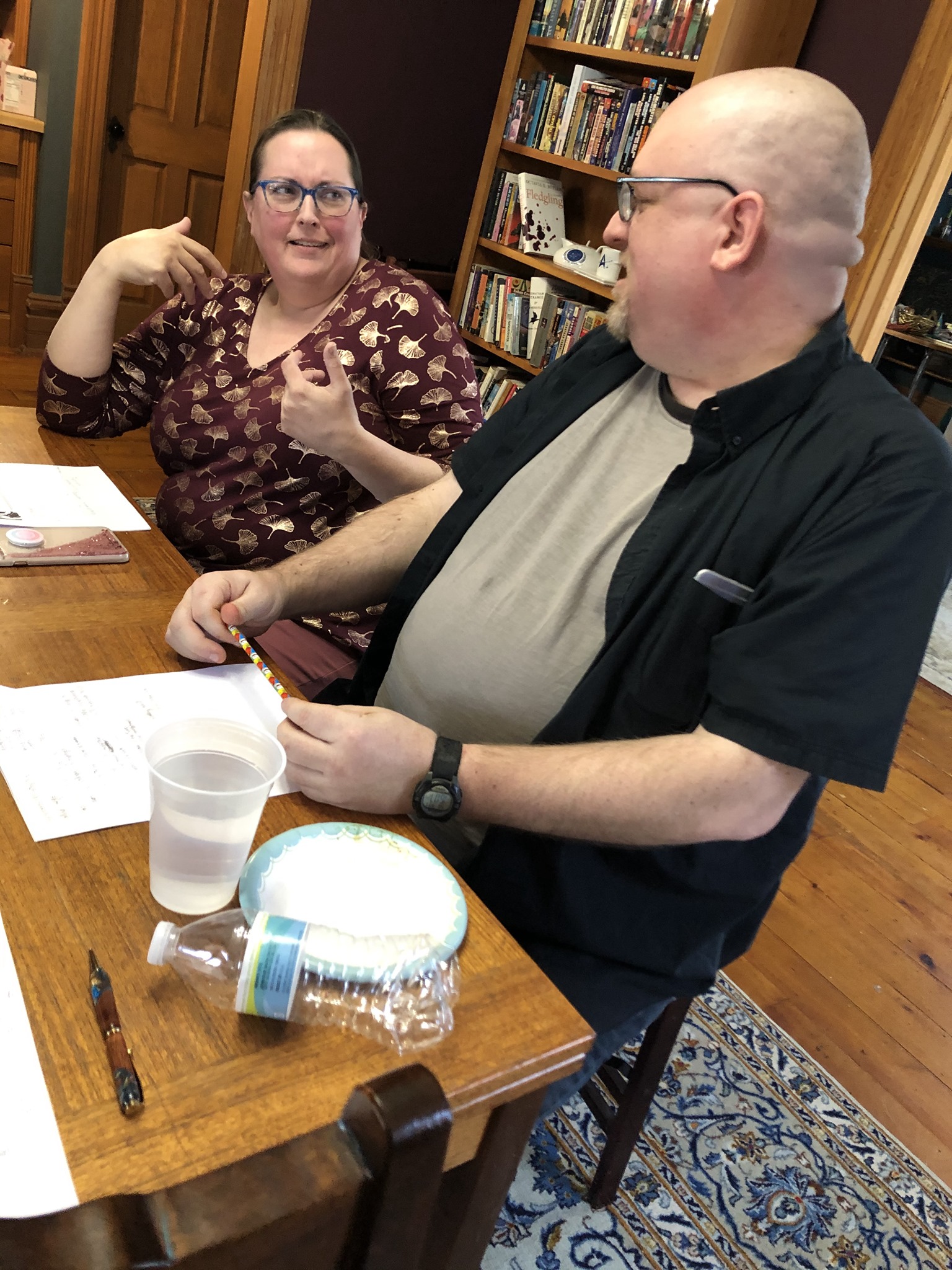