I’m watching Restaurants on the Edge, a new Netflix show where they save failing restaurants around the world. Less yelling and actual chef/owner re-training than when Gordon Ramsey does it in Kitchen Nightmares, more travelogue and cultural history. Just a little ways in, and I mostly like it, though the Derridean in me is slightly cranky about the title.

They’re making a play on words with ‘edge’ — the restaurants are on the edge of failing, but also exist on the edge of the world. And okay, having come up with the concept, I can see how hard it would be to resist! And so far, the show itself seems reasonably respectful of the people and the culture they’re visiting (Malta, first episode).

Lots of focus on local food, the skills of local artisans. I appreciate that (though @Joel Keller’s review for Decider did think it had the visitors dominating, and a feel of North Americans ‘strip-mining’ the local culture). 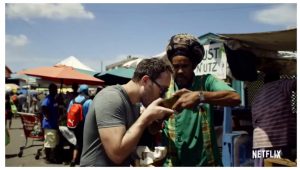 But it’s mostly the title that’s bugging me right now. How are you defining ‘the edge’? Who gets to be the center? I mean, any good post-colonialist would have to throw up her hands and say ARGH, right?

I want them to do an exotic travelogue style episode to some place in America early on, some place mostly populated by white people, just to counter the baseline assumptions you’ll be reinforcing otherwise. Somehow I don’t think they’re going to do that.

Looked it up a bit more — the hosts are all Canadian, so I guess that explains Tobermory.

Also a little weirded out now by sometimes it’s a city, sometimes a country… Which places get to be defined by something smaller and local, rather than their entire nation?

I wish at least one of core experts was visibly POC. You can’t always tell ethnicity by looking, of course, and Liberato might be POC? A quick googling didn’t make that clear. But they definitely lean white, and I would hope that if you’re putting together an ensemble travel show in this day and age, you’d at least think about that.