Sometimes projects take a long, long time to come to fruition. Ten years ago, we bought this house, and in the process of renovation, cut down some trees. I salvaged the top of one, spray-painted it silver, wrapped it in string lights, and put it in our bedroom. There it sat, and for a while, I was happy with it — when the kids were small, it was hard to think about anything but getting through the days! 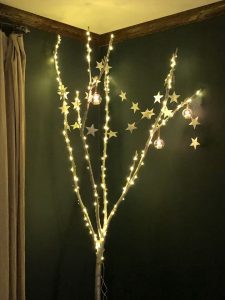 But eventually, it started to bug me that I hadn’t actually done a thorough job with the silver paint, so there was a bunch of bare wood visible, and the string lights I’d used were kind of ugly, with big white casings sticking out all over (I can’t think of a better way to describe it, but they were clunky, trust me). I think those were the only ones I could get back then, but since, they’ve made widely available the style of fairy lights that are tiny beads of light on wire, which wraps well and is almost invisible.

So this weekend, while the contractor was fixing our broken washing machine, I spent a few hours puttering in the bedroom. I took all the old lights off the tree, trimmed off a few extraneous little branches that had been bugging me, spray-painted it much more completely. When that was dry, I re-wrapped it with the better lights (which I’d bought months ago, but hadn’t had time to do anything with). I hung a few little glass ball thingies in the tree, and added candles. I strung it with silver stars. It is SO romantic when lit. 🙂 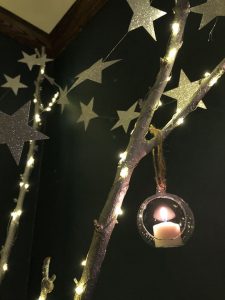 I’d also gotten some light-up branches to put behind the TV; the room is fairly dark generally, with two beside reading lights, but nothing else. Mostly we’re sleeping or watching TV or reading in there, so more light hasn’t been a priority, but on occasion, we’ve wished for a bit more light. There’s a ceiling fan, which is absolutely essential for our good sleep, and we could have gotten a similar fixture with lights attached, but I was envisioning this tree of light, and I thought similar lights in another part of the room might suffice for our needs. 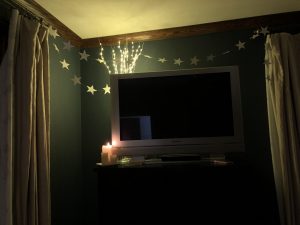 It’s honestly not exactly what I’d want? I like the tree a lot; I’m happy with how that came out. The branches, though — what I’d rather do eventually is get some real branches from the yard, spray paint those silver, and hang them from hooks in the corner, with the lights entwined as on the tree. If they’re sturdy enough to hold a glass ball with tea light, even better.

The lights come with remotes, so that you can turn them on and off from the bed; another option is a smart plug, if you have Alexa or Google Home for voice control. You do have to get out of bed to blow out the candles, though…

I have more plans for the room — I may add some silver tree stencils to the wall, for example. I kind of want a forest there, or the hint of one, with birds flying overhead. I’ve thought about painting the ceiling dark blue too, with stars. That’s a bigger project, for another day. We’ll see. 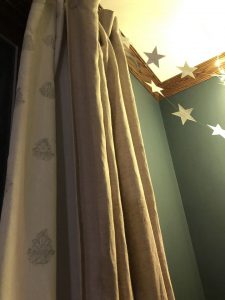 The light linen curtains are from IKEA, and they’re fine, but a part of me rather longs for deep velvet curtains instead. And some kind of canopy over the headboard, on the other side of the room — it’ll require a little planning, given that we don’t want to block the ceiling fan, but I have some ideas. The basic idea is to turn our bedroom into Cair Paravel. 🙂 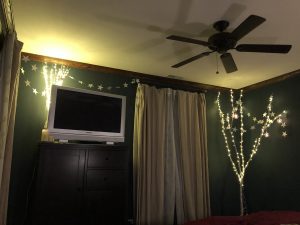 It’s nice to finally do something in this room, which has been pretty neglected on the list of house projects. Working on it feels a bit like working on my relationship too, saying that Kevin and I, we’re a priority. Making time to spend with him, making it lovely, is worthwhile.

[pausing here to send kisses to Jed too…maybe someday we’ll live in the same city, and can have a shared space of some kind]

I probably should have spent these weekend hours working on Feast publicity tasks, or processing e-mail, but sometimes, you just need to make a little magic instead.