Anand had so much fun setting the table creatively, I had to share.

The leftover pasta looks a little dull on the plate next to the brightness of the steak and broccoli on the plate, but it was super-tasty, so we’ll allow it. Tasty > pretty. Kevin had made simple sautéed chicken thighs with bacon, served with buttered spinach noodles the night before. It was fine, but I had some leftovers to use up. 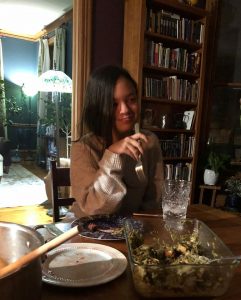 I ended up re-doing the dish after Saturday’s dinner — I put a little olive oil in the pan, added a bit of flour, sautéed for a minute, added cream, salt, pepper, to make a nice sauce. Then lemon juice (careful that the cream wasn’t too hot at that point, so it wouldn’t curdle), because I was craving a bit of tang. Added in his chicken with a bit of bacon, also the leftover sautéed onions and mushrooms from the fridge, also the leftover roasted brussels sprouts from the fridge, plus the cooked spinach fettucine. 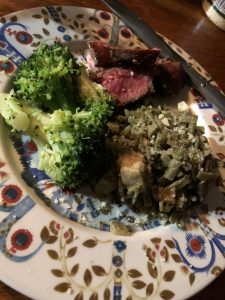 Just stirred it all together for a minute to blend — didn’t want to make the pasta mushy — and then grated in about 1/2 a cup of fresh Parmesan, stirring. Mmm….refrigerator pasta. It’s the best, esp. if you’re the frugal sort who hates wasting food, and the easily-bored sort who doesn’t want to eat exactly the same thing as you’ve eaten for the last three days….

It came out so well that on Sunday, I had to stop and ask Anand if he *really* wanted thirds of the pasta, if he was actually still hungry, or if it was just tasty. He paused, and admitted that it was just tasty. I told him to slow down and drink a glass of water, see if he wasn’t actually full. He was, as it turned out. 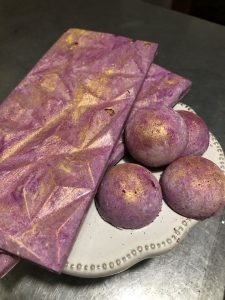 I mean, not too full for dessert, but that’s a separate stomach anyway. 🙂 We just did Italian cookies (that a kind soul had brought to the garden club meet-up we’d hosted earlier that day) and Mommy’s failed chocolates. They were fine, just not quite as delicious as I’d hoped. Failed chocolate is often still tasty.