You know how you think you’re going to have kids and you’re going to read to them and it’s one of those super-sweet dreams of parenting – but then it turns out that your actual children just want to hear the same terrible picture book twenty kazillion times and after a few years of that, it turns you off the whole idea of reading to them and you abandon it entirely?

Maybe that was just me. Once they were able to read on their own, I didn’t even try read to my kids; I didn’t have the patience. I felt rather guilty about it, and also a little sad.

But in 2020, we’re trying to wean the family off electronics before bedtime so we sleep better, and as part of that, everyone’s electronics go off from 7:30 – 9:30, when the kids are getting ready for bed, and we’ve been playing games mostly (Anand narrowly beat me at chess tonight), but at the start of the year, I also started reading to them.

Not every night, because sometimes I’m too tired or have too much work or just have no capacity for whatever reason. But we’ve done several nights now, and we’ve finished chapter 1 and are into chapter 2. Woot. Even better, they claim they like A Wizard of Earthsea, which is remarkably satisfying, given that they’ve roundly rejected much of my childhood favorite fiction.

I don’t know if they actually like the book, or just like snuggling up with Mommy reading to them, but whatever — I’ll take it. I wish I’d tried this years ago.

As a side note, the big Le Guin Earthsea anniversary omnibus with the lavish Charles Vess illustrations makes it a particular delight. 🙂 🙂 🙂 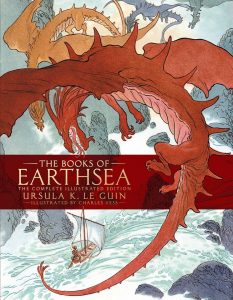