I have this weird love-hate relationship with magazines. I’ve bought a lot of them in my time — I went through a big Martha Stewart Living phase, for example. Cook’s Illustrated is a perennial favorite. All the shelter magazines were in heavy rotation when we were renovating our house, and these days, I’m reading (well, skimming) tons of food magazines, as I think about pitching and writing essays for them, mostly to help promote the cookbook. I even fantasize about an occasional Serendib Home magazine. 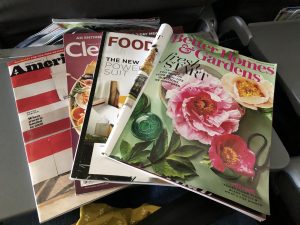 This time of year, the magazines are chock-full of resolutions and ways to improve your life. There’s something so seductive about the way magazine articles promise not just to entertain, but to inform, to make your life better. And you don’t need to read a big thick book first, no! Who has time for that? Here’s a helpful tip, a life hack. Something you can read in a few minutes (illustrated with gorgeous, sexy pictures) and implement immediately.

I’m not saying it’s a big lie, exactly. But if you read several issues of say, Real Simple, in a row, you realize that they’re basically telling you the same things over and over, such as advising you to get rid of your stuff! But what if you need your stuff, and can’t afford to just buy it again when you need it?

And all while they try to sell you more stuff (explicitly in marked ads, and implicitly in hidden advertorial content), slightly more expensive than your old stuff, but just that little bit prettier or more efficient. Presumably selling you those because the real money that supports the magazine comes from ad sales.

After being introduced at Clarion by our instructor Nicola Griffith to the parts of the publisher’s promo budget that go for things like magazine ‘advertorials’, I became deeply suspicious of the magazines themselves. (Honestly, I was a little shocked when I learned that which books go face front on the shelves, or on end caps, or on the front table, are paid for by the publishers. I was very naive.) That’s a lot of why I wanted my magazines (Clean Sheets, Strange Horizons, Jaggery) to be community-supported from the beginning. Though of course, the internet ad money mostly drying up within a few years contributed to that decision too…

I do still enjoy magazines. When I read an issue of The English Garden, I often do come away with at least 2-3 ideas that I make notes on, to try to implement in my own garden. Wouldn’t these rose vines look better with clematises climbing on them, so that you have active blooms in that spot for more of the year? If my home and garden are beautiful, it’s in large part due to all the magazines I’ve consumed. Also the books and the TV shows on design, of course, which mostly aren’t selling products to you quite as intensely, but the books usually have a larger up-front cost (hooray for libraries), and TV you’re paying for in other ways.

I’m just feeling a little conflicted about writing for magazines. I want to be careful to try to write things that are worth your time to read, even if the editors decide to pair my recipe for Instapot chicken curry with a feature spread on ‘the three best Instapots, ranked!’ A feature that was probably paid for by those particular Instapot manufacturers.

I can’t be too precious about that structure; it’d be hypocritical. That ad money is what lets the magazine exist, and what lets them pay me for my essay. And of course, I’m mostly writing my essay in the hopes that people like it enough that they read my bio at the end, notice that I have a cookbook for sale, and think “Oh, I want to buy that!” Capitalism, hmph. I wish I could just GIVE everyone copies of the cookbook. In the post-capitalist utopia to come, perhaps.

Just — I hope people are aware that so much of what these magazines are selling (peace, calm, an organized home, world cuisine recipes your children will adore), often require more money to achieve easily.

Quick tip! Buying a host of beautiful squared off, stackable glass jars will make your kitchen spices look much more organized, clean, and aesthetically pleasing, like something in a magazine! But those gorgeous square jars (oh, Container Store, I can’t quit you…) will also cost a lot more than recycling the spaghetti sauce jars and bouillon cube jars, the kind my mother uses to hold her spices.

Well. I don’t mean to be too dreary and fun-spoiling. And I’m not undoing capitalism today. But I can at least try to think about what aspects of the things I do can be replicated without spending a lot of money or time. And I can think about what makes for good design, which doesn’t necessarily mean it has to be expensive.

Mostly I can try to keep talking about this issue, every once in a while at least, because the last thing I want is for someone to see a beautiful photo of my food, or my kitchen, or my garden, and beat themselves up because they struggle to achieve the same. It’s not you — it’s the system, and in particular, the way the economic divide has widened in the last decades.

Maybe a magazine piece can offer a tiny bit of help, though, if done well. A new practice that clicks, and turns into a rewarding habit?

A little easing of the road, a new perspective, a spot of beauty. That’s something to strive for.