The rest of the house is actually clean again; the kitchen has a bit more to go. But I wanted to be sure to take a photo of this garland as it’s my favorite bit of party decor this year — I love the wild drapiness of the top. It makes me want to belt out “Good King Wenceslas” (I like taking the part of the king, of course, even if I’m singing with Jed and his deep voice), and hunt up that gorgeous scene Susan Cooper wrote in _The Dark is Rising_, when Will goes back in time. 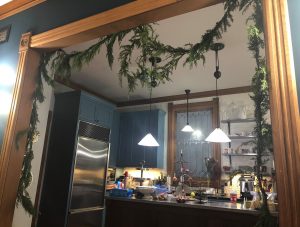 I suppose it would be a fire hazard to leave cedar boughs hanging for months on end, and I imagine they’ll get dried out and less lovely eventually. But it is tempting to hang them everywhere — more for next year’s party! I want to live in a forest, clearly.

Someone who attended very kindly said last night that she loved my sense of color and design aesthetic, and she wished that I had a Serendib line in Target that she could buy. From her mouth to Target’s ears! That would be such fun. I still don’t know how to describe my design style, though. Modern-desi-industrial-medieval? Something like that.

I admit, I’ve toyed with the idea of Serendib Home turning into some kind of shelter magazine down the line. That’d be a big production as an ongoing thing, but it might be a fun project to do a one-off issue, once in a while. Annually?

Serendib Home 2020, with food and garden and decor and memoir-ish essays and poetry. Maybe that would be a better form for the domesticity memoir I’ve been working on off and on than a standard book, though I think bookstores would have no idea what to do with it.