That was close! Worse than traveling with curry powder bags? Traveling with curry powder bags and being behind a tall brown guy in the security line who got three different security people called over to give him a full pat down AND go through his things twice — he’d made the mistake of carrying through several rectangular pieces of cashew candy from India. I swear, I wanted to offer to eat one just to prove it was safe. They looked delicious.

And THEN the extra security disappeared once he was through, leaving me with one older man who was very nice but insisted on riffling through every book in my suitcase (packed for sale at the conference), exclaiming at my photo on the back cover and babbling about how I was a celebrity and he was going to see me on TV one day. I finally had to beg him to speed up, though it’s usually my policy to be very carefully compliant, polite, and infinitely patient with airport security.

He did speed up, apologetically, and then I ran, which I haven’t had to do in an airport in a long time. Made it to the gate 5 minutes before they closed the boarding doors! 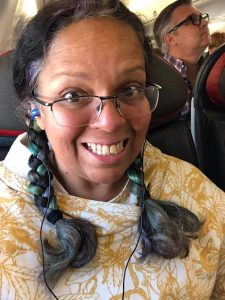