My grad school classmate, Nicole Walker, has a book, _Sustainability: A Love Story_, tiny lovely essays that are mostly centered on how we want to do good things for the planet, but it’s hard and we are lazy and so often we don’t live up to our ideals. My burning bush is one of the places where I fall down.

I love this shrub. It’s really more of a small tree. When we bought our old Victorian house, we had an arborist come by to assess the trees on the property — they said they’d never seen a burning bush get so big, and estimated it was at least a hundred years old. The lifespan of burning bush is 250 years, so that seems plausible. Since it’s planted right by the front door, and the house was built in 1885, it’s entirely possible that the first homeowners planted this when they built the house. 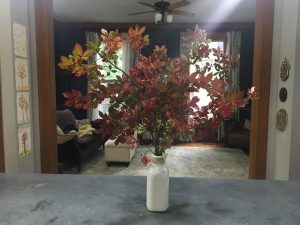 For over a hundred years, the burning bush has graced our front door, turning a brilliant crimson to herald the autumn. When almost everything else in our yard was destroyed during the construction and renovation process, we were careful to protect it, and it survived. A little triumph of nature, or so it seemed. 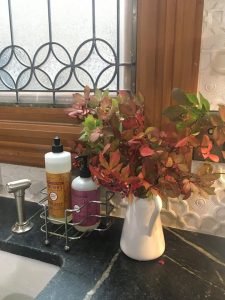 Then this year, I learned that burning bush can be invasive in our region. The bush itself is well-behaved in our garden — it doesn’t send off suckers or anything like that. (We’re *still* trying to eradicate the tree of heaven, ten years later.) It doesn’t bother the neighbors.

But it turns out that burning bush seeds are dispersed by frugivorous birds that eat the fleshy arils and spread their seeds to new locations. Once established, burning bush can form dense thickets, displacing native vegetation. It’s native to northeastern Asia and was first introduced into North America in the 1860s for ornamental purposes. (Ah, I can imagine that young mother in 1885, thrilled by the exotic shrub that she can add to her new home and garden.) 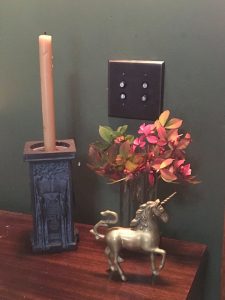 I know I should remove it and replace it with a native. Probably a serviceberry; their clusters of little white flowers would be beautiful in early spring. In summer, they’d produce lovely berries (different varieties offer red, almost black, purple, purplish-black, or blue-black). And some varieties have glorious orange-red leaves in autumn. Overall, a serviceberry would be a net gain over a burning bush, on both the ornamental and the ecological front.

And yet. On the one hand, removing and replacing a tree is costly, esp. if we want to put in a larger tree so we can enjoy it while we’re still living in this house. My garden budget is spent (and overspent) for the year already.

More of an issue is that I’ve grown attached to this burning bush. It has a story and a history, and I hate the thought of cutting its life short, perhaps only halfway through. I know it’s ridiculous, but if I could pick it up and move it to somewhere it wasn’t invasive, I’d seriously think about doing that. But that’s really not practical. 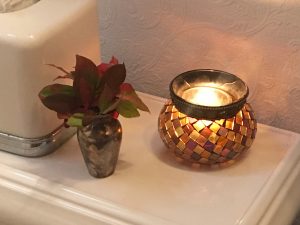 For this year, at least, the burning bush will stay. I’ve just trimmed off a partly broken branch that was hanging down and blocking the path, using it to make four different fall arrangements for the house. These berries, at least, won’t be eaten by birds and then deposited in fragile native woodlands. Maybe next year, the pangs of mother-Earth guilt I feel when I glance at the tree will outweigh the vestiges of attachment.

Maybe I’ll put my sentimentality aside then, and go serviceberry shopping. I can see those white spring blossoms already. And if that young mother in 1885 could consult with me over the decision, I think she’d approve. She worried about her children’s future too.

1 thought on “I love this shrub”