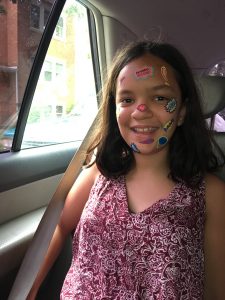 Just-turned-11 Kavi had her first babysitting gig this morning, or rather, first mother’s helper gig ($5 / hr for 2 hours), and appears to have passed successfully, despite being super-tired from having a sleepover the night before. (I did warn her that this was an unwise combo, but she promised me that she would get up in the morning and not cry, which she mostly managed.) She basically spent the whole time playing games with a very active 3-year-old. 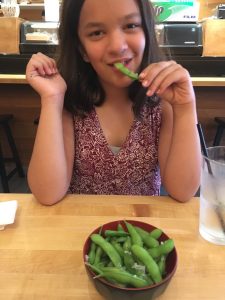 We had a nice talk on the way there and back about work, and how it can be very satisfying and enjoyable (and that both Daddy and I love our work, mostly), but sometimes it’s just hard and tedious. I told her that she’d have about ten years to try different kinds of work and see what she liked doing (with people or on her own, inside or outside, physical or mental, etc.). We also talked about how a lot of people don’t have much choice in what kind of work they do, and she’s pretty lucky and privileged to have options about it. She said afterwards that she liked working with little kids, that it was fun and pretty easy, because when she got tired of running around playing, she could just sit down and supervise. Then we talked a little about how childcare isn’t paid very well in this country, because our society doesn’t value it as much as some other places do… 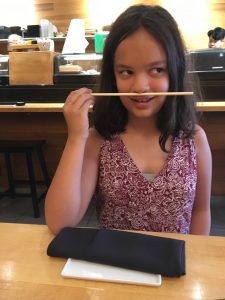 Afterwards, to celebrate her first real job, I offered to take Kavi out for lunch, either takeout or a restaurant. She picked restaurant, and sushi, which speaks well for her evolving taste if not for our budget. Last year, it would’ve been Wendy’s for sure. But thankfully you get a lot of food for a $13 bento box at Sen, so it wasn’t too bad, and my poke bowl was $10, delicious, and made me think of Hawaii, so a bargain, clearly. Kavi wouldn’t try it, but declared it very instagrammable, and predicted that it would get 10,000 likes. 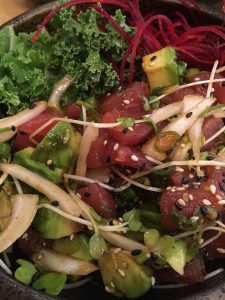 I wish I’d gotten a photo of her trying the tofu in the miso soup because she hated it SO much, and her expression was pretty priceless. She says it is tied with squash for her most hated food. Ah well! She enjoyed the edamame (always a big hit, as my girl loves salt), onion tempura (which surprised me, but she claims she’s ALWAYS loved onion rings), California rolls, and teriyaki steak. She hasn’t liked teriyaki before, so that’s exciting for me, as it opens up our family dinner menu options a bit. 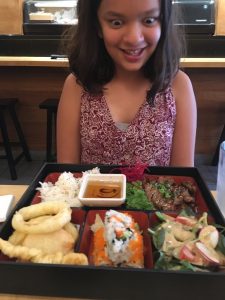 Oh, one last funny bit — we calculated how much she’d earn if she worked 3 hrs / week for a year, and it’s about $720, and when I told her that, her eyes completely bugged out. “That is a LOT of money!”