I’m in CT for a few days, helping my parents with some medical stuff. I’d hoped to spend at least some of the time writing — on the plane flights, in the early morning and evening. I couldn’t settle down to writing on the plane, though — I alternated between playing puzzle games on my phone and reading. My brain is so scattered these days.

The reading was good, at least — I finished reading Roxane Gay’s _An Untamed State_, which was brutal and beautiful. I put it down feeling a little despairing, though — is there anything that woman can’t write? She just amazes me — short stories, essays, memoir, novel, all with her trademark combination of searing honesty and gorgeous prose.

I might have just gone back to my phone game after that, but they were serving drinks, so I ended up chatting with my seat mate. He asked me about my cool laptop cover (a photo I took in Sri Lanka, printed by GelaSkins), and somehow we segued into talking about what we do. I told him I was supposedly working on a novel. It turned out that he (Patrick Harlin) was actually a professional composer, heading to Connecticut for three weeks for a residency program. He was going to hide in the woods and write music.

We talked for a while; the contrast between our lives was so acute. He’s 33, finished a doctorate, composing full-time. He has deadlines he has to meet, but generally seemed to feel like he was able to support himself without compromising his art. Living the dream. I’m 46 now. At 33, I was in the midst of my Ph.D. program, and just about to sell Bodies in Motion. No children yet, no cancer, no political career — I had reunited with Kevin, and we were both so focused on our work.

If I believed in signs, I’d feel like the universe was trying to talk to me, seating Patrick next to me on that flight, heading off to his residency. Telling me it was time to stop being distracted, go deep. He was reading a book, _Deep Work_, which I’ve now picked up from Amazon. I’m not sure it’ll tell me anything I don’t know already (cut down on social media and other interruptions; make the space where deep work can happen), but it’s supposedly full of inspiring stories along with useful strategies. Maybe it’s like advertising — you need to see a product several times before you’re ready to buy.

(photo on my laptop: from the train ride from Colombo to Nuwara Eliya, Sri Lanka. Heading into something dark and green and unknown.) 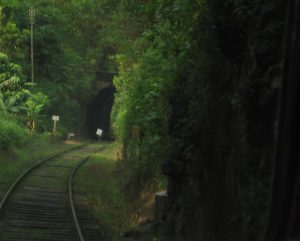