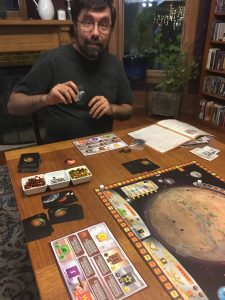 Poor Jed, looking perhaps a little stunned as we head into the fourth (!) Terraforming Mars game of the weekend, this one a head-to-head version. Still took close to three hours to play through (Kavi was shocked to realize a game could take so long, and her early requests to learn the game switched quickly to “Maybe I don’t want to learn how to play this after all…”). I’d say I’ve probably done about a dozen hours of board gaming in the last two days, which is a little intense, even for me. My back hurts!

Jed thoroughly stomped me in this one, after taking an early lead with two cards that revved up his money production — I fought what I think was a valiant rear-guard action, but really, it was pretty hopeless. Fun, though.

(Never give up, never surrender!)

We played with actual corporations instead of the beginner version, and I think at this point I know the game well enough that I could teach it to someone else. Of course, if I want to accomplish anything else this month, maybe better if I don’t pull it out again….