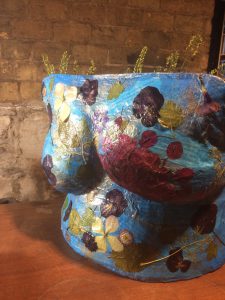 When I was invited to participate in this breast cancer gallery exhibition, I wasn’t sure what kind of imagery I’d end up with for the finished piece. I felt a faint pressure to keep the work positive, uplifting, and that made me cranky, because my experience of breast cancer had plenty of darkness to it. I was a little tempted to slather black paint over the whole thing and have done with it.
But that’s not really me. I had one idea that I thought would work well, to build a harness to surround the torso, sort of a warrior woman kind of thing, calling back to Wonder Woman and Amazon mythology. But that wasn’t really me either — I didn’t experience cancer as a fight, a battle, the way it’s so often depicted.
In the end, I thought about what sustained me, through that difficult year, and I came up with three things: my garden, my writing, and my friends and family. They’re all represented here. I started with a blue background, the color of a sunny sky on a beautiful day. I added marbleized gold and gold glitter — that’s my friends (both online and off, and even a few total strangers) and family, who gave so much support in so many different ways. 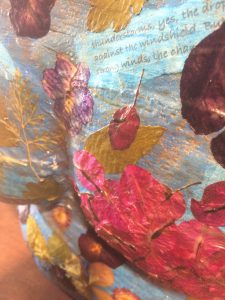 Then I added a poem, “Tornado,” that I wrote during the year of treatment, a difficult poem, but a hopeful one too. I gathered flowers and leaves from my garden and the grocery store and pressed them, and then placed them on the piece. The front and back were approached differently — I started with bougainvillea petals on the left breast, where the cancer had been, because bougainvillea will always mean Sri Lanka to me, and that’s a piece of my heart. They scatter outward from there, pansies and hydrangea and mums and even a poisonous oleander blossom, as if picked up and tossed about in the storm. 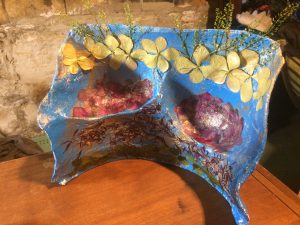 On the back, I composed a little differently — a crown of hydrangea blooms above what looks a little like a face, or a mask. Sometimes, cancer felt like that — as if I were overexposed, with all the world knowing what was happening to me, and all I wanted was to disappear, to hide. And then roses, for the people who live in my heart, with a scattering of petals and greenery beneath. Green for life, and healthy growth emerging. 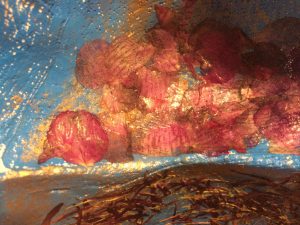 I didn’t have to make something pretty, but in the end, I’m glad I did. That’s important to me, and is what I’m often trying to do as a writer — to take pain and try to make beauty from it, when I can.
*****
Tornado
We knew it would rain today, but
driving to the first chemo appointment,
the radio upgrades the warnings –
thunderstorms, yes, the drops hammer
against the windshield. But hail too,
strong winds, the chance of a tornado.
The garden is waking slowly, early snowdrops
giving way to scilla and chiondoxa,
tiny and tough. With rising warmth, bluebells
and crocus emerge, daffodils open. Cool whites
and blues are joined by warmer tones; pink
hyacinths release their scent –
washed away in today’s storms.
Some flowers may survive. Others will be beaten
down, petals tattered, leaves and stems dragging
in the mud. Tomorrow I will walk my garden
and count the toll of devastation, mourn each
brave blossom – my hands dug them in,
planted them deep, for this?
But roots survive, the bulbs beneath the soil.
Most daffodils still hold themselves tight-budded,
will open when the sun returns; the tulips
will spring forth, straight and proud and tall.
Into every life a little rain must fall. Last night,
we read over the lists of symptoms and side effects.
No toxins in my soil, but we still pour them
into my body, to fight this strange unwanted growth.
At garden club, I ask, despairing, what to do
about the burdock – I dig and dig, but it keeps
coming back, the bastard. A long taproot, tenacious.
She says even eco-conscious sorts
may resort to poison in the end. But rather
than pouring it over the plant, the soil,
they paint it on, delicately, with a paintbrush.
The new drugs work like a paintbrush – focused,
targeted. We hope their poisonous effects
will be lessened and contained. There will still,
undoubtedly, be some damage.
We ask the universe for a favor today.
Let the worst of the storms pass us by,
let the tornado touch down, lightly, and rise again.
Let the winds dissipate
while there are still flowers on the bud.
Let the sun return.