Thanks to Jed for coming along to my library board investiture last week and taking pics! Let us pause to admire my jacket — it is the only jacket I own, and I’d never actually worn it before; I picked it up secondhand a year or so ago, even though I never wear jackets (and it was the teeniest bit small for me), because I couldn’t resist the chain mail details on collar and sleeves. But I was glad to have the added formality for the swearing-in ceremony. Perhaps there will be more jackets in my future? We’ll see. 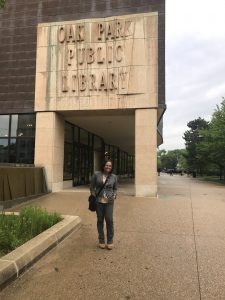 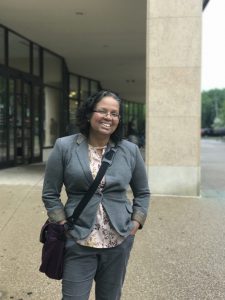 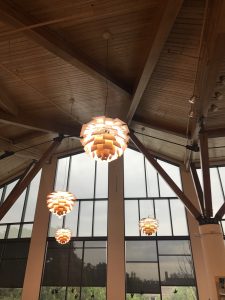 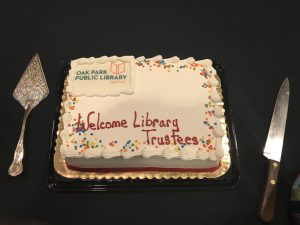 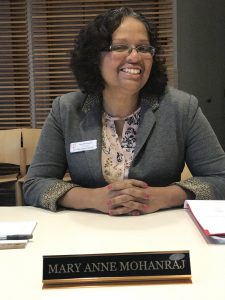 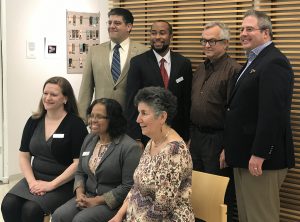 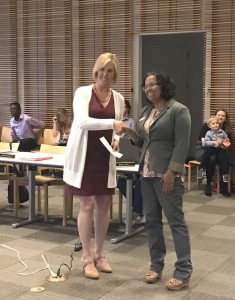 Oak Parkers, one last reminder that as of June 1, our libraries are now fine-free (if you’re checking out Oak Park books). If you have too many outstanding titles, you won’t be able to check out more, so there’s still incentive to return books.

I think this is a great move that will help create equity and foster access. Fines are a regressive funding model, in that they hit hardest those with the least ability to pay. If your monthly household income is $500, a $5 fine is going to hit your family much harder than if your monthly income is $5000.

There are better, more equitable ways to fund our libraries (though I admit, they may require fighting with your city council to get them through…).

Getting rid of fines will mean that families who had stopped using the library because of inability to pay (and/or shame about the fines) will now be able to use it freely again. I like to think it’s what Ben Franklin would have wanted.

Thanks to our librarians for requesting this change, and gratitude to our community for supporting them in it. Oak Park is a relatively well-off Village, and our libraries are almost entirely supported by property taxes; fines have historically been a small proportion of the library’s budget. We can afford to extend the best possible library access to all. 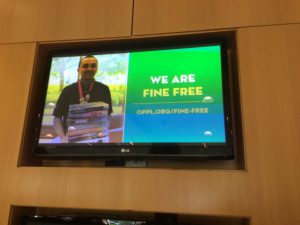 I’m very happy to see this change as well, which took place just before I was sworn into office. When I attended a January board meeting as a private citizen, I made a public comment about the value of getting rid of meeting space charges.

The library staff and the board reviewed costs, and the meeting room income is a tiny fraction of the library budget — and of course, it does cost the library some administrative time to track and administer those payments.

They decided that at least for non-profit orgs, it made sense and was in keeping with the library’s mission to remove those charges. A great move! 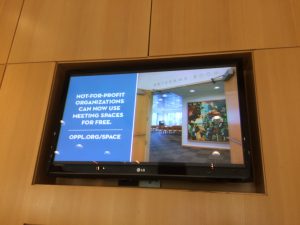 I have to say, it is SUPER-EXCITING to be able to enter the library when it is officially closed.

The little girl who basically lived in the library and who still lives in my heart was doing cartwheels. 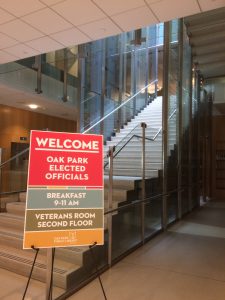 This morning’s breakfast was mostly a meet-and-greet that welcomed in newly elected officials (held once every two years, so not a huge expenditure of taxpayer funds, I promise), and graced by awesome spoken word from three of our high school students. Very cool.

I didn’t plan on this, but I did end up getting a little trustee business done. I found myself at a table with two folks from the township board and with David Seleb, our library’s executive director, so I brought up an idea from the campaign — some of the seniors I’d talked to found it difficult getting to the library, and I knew our Township (which does senior services) had a shuttle bus.

I asked about the possibility of ‘library Monday’ or some such, where they shuttled around to the different senior centers, brought them to the library, waited, and then took them back again.

They were open to the idea, but mentioned that it probably wouldn’t be weekly (sure — I have no idea how much demand there’d actually be), and then they quickly spun off a few more ideas — combining it with some senior-focused programming at the library, so there’d be a particular thing they could attend. Also perhaps combining it with a high school group learning computer instruction — they could come in and teach a class to seniors, which would be something helpful to their studies as well, a sort of practicum.

In a few minutes, we developed what I think what might be an interesting addition to everyone’s programming — we’ll see how it develops. But three cheers for creative problem-solving, intergovernmental cooperation, and getting things done over bagels and lox. I do like bagels and lox. 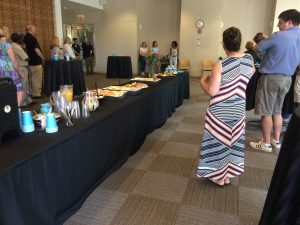