Our local Democratic Party has been bringing the governor candidates to Oak Park, which I really appreciate. I was out of town for the last pair (Kennedy and Biss) — need to watch the recorded video. And I was coaching Kavi’s game while Ameya Pawar was speaking, sadly — I had really hoped to make it in time for him. He’ll be at L!ve Cafe soon, though, and I’ll be going to that.

I did manage to catch Pritzker, and I have to say, for a billionaire, he didn’t seem half-bad. He was certainly saying all the right progressive things; his policy seems on point. And he presents very well, so I think he has a good chance of being able to win voters (esp. with the help of all that money, of course).

Well, we’ll see. I’m going to go see Pawar, and research the other candidates more, and at some point in the next few months, will likely make my pick for my preferred candidate, with the plan of putting in some significant time supporting their campaign. Hosting a fundraiser or two, organizing Oak Park door-knocking and mailing, etc. and so on. My campaign is over, but there’s plenty of Democratic work to be done between now and 2018. Time to be a good foot soldier for the party.

(Also pictured here, library board member Matt Fruth, setting a good example — he was there with his babe-in-arms, asking tough questions and holding the candidates to account!) 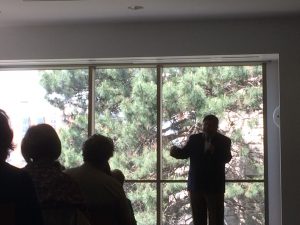 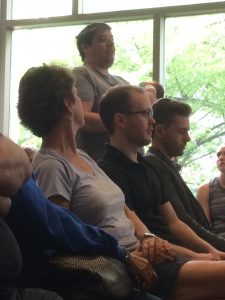