Tomorrow is election day! I took a few minutes to run the yard sign from my own yard over to Village Hall. I really love my custom acrylic sign! Civic excitement! 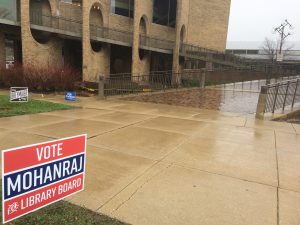 My yard sign wasn’t exactly the first one there.

🙂 A certain air of frenzy surrounded Village Hall — the signs extended all the way around the block! 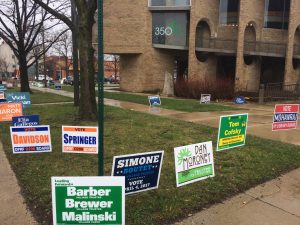 I chatted with the officials for a few minutes, and found that about 2500 people have early voted. This is high, very high, for an off-year election. I think we should take bets on how many will vote in the end, in the classic Let’s Make a Deal mode. If you go over, you lose; the closest to the actual number wins.

To help you cast your bet, Oak Park has around 60,000 people, some of which are children or otherwise non-voters. About 6000 – 9000 people typically vote in an off-year election.

My prediction for this year: 15,000. I think it’s going to blow other years out of the water. In part because of the D97 referendum, but mostly because of Trump. The tides of civic engagement are running high! 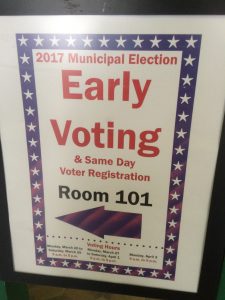 Here are the doughty stalwarts, the fierce warriors, canvassing until the last possible moment, creating a gauntlet that hapless citizens had to pass in order to vote. (Kavi and I might do a bit of that tomorrow.) All hail the public servants! 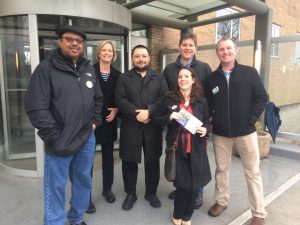