Groggily awake, about forty minutes from home. Slept better last night, due to my seatmate not being here; she was coming back later on a plane; I got to curl up a bit, which helped mightily. I admit, if I’d planned this further in advance and could’ve gotten a reasonably-priced flight, that would’ve been a better option — I wouldn’t recommend the Rally bus for the experience alone. Well, maybe once. But it’s definitely a little rough. (And the WiFi didn’t seem to work; I’ve been tethering my laptop to my phone’s WiFi, and I don’t have unlimited data, so I imagine I’ve used it all up, and possibly then some.)

D.C.’s entire population is only about 670,000. The march concentrated 500,000 people on the Mall and surrounding streets. It was a little frustrating at the time, not being able to see the performers (or even come close enough to see the Jumbotron scenes), or to hear anything. But in retrospect, given those numbers, I forgive the organizers for not setting up more speakers and screens. This was an unprecedented event.

Very glad I went, though it’s going to take me a little while to really understand the experience in some ways. But at a time when the future is feeling so uncertain, it felt like in that moment, the best thing I could do was put my body out there, demanding to be counted.

I know not everyone who wanted to march could do so, due to physical, financial, or other challenges. But however you choose to participate, now is the time to do so. Stand up. Be counted.

(Pictured below, me and an old friend I haven’t seen in forever, Angeline Martyn. It ended up far too crowded for us to find each other at the march; we marched separately. But we were together.) 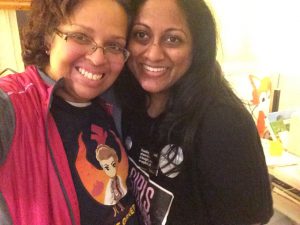