Skip to content
Authors Brandon Sanderson, Mary Robinette Kowal, Wesley Chu and me! At the Cards Against Humanity offices yesterday, where we met in their sound studio to record 2017’s Writing Excuses podcast (2nd week of the month, January-December). 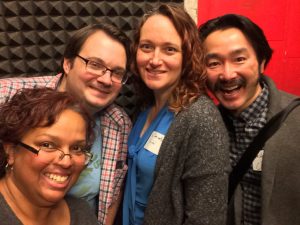 We recorded six 15-minute podcasts yesterday, and will record the other six today — really fun, and I think I learned some things as well as hopefully offering a few useful pieces of writerly advice. It’s a great podcast; I think I’m going to assign it to my advanced fiction writing students in the spring, that they listen to fifteen minutes once a week. More fun than working through a textbook (though we’ll do some of that too). Thanks to Mary Robinette and Brandon for inviting me to join them for 2017!
Brandon Sanderson, by the way, is a sweetie. I haven’t actually read any of his books yet, but I’m told that you can skip the tail end of Robert Jordan’s books and pick up Wheel of Time where Sanderson came in to finish the series. I think I may do that as a holiday treat. 🙂
The CAH people were also really nice — Max, their founder, gave us all advance packs of their new Sci-Fi cards, which aren’t even out yet. Sweet!