Skip to content
The bi-color vanilla-rose marshmallow process I tried last night worked fine! Mix the white marshmallow, spread half in the pan, add food coloring and beat a little more, than spread second half over. All a little messy, but that’s the way of marshmallows.
Original recipe (for single-color marshmallows) below.
*****
Christmas Vanilla and Rose Marshmallows
(45 min. + cooling time — serves dozens)
Homemade marshmallows are so much better than store-bought — there’s just no comparison. Store-bought is tasty enough for dunking in hot chocolate or toasting over a fire, but these, I happily devour, straight up. This is based on Alton Brown’s recipe, which is pretty identical to traditional Sri Lankan marshmallow recipes, and probably marshmallow recipes the world over, but his offers slightly more precision. We traditionally make these at Christmas, and often color the marshmallows for extra festivity.
It is much easier to make this recipe with a candy thermometer, or with some practice making candies and knowing how to test for soft ball stage.
3 packages unflavored gelatin
1 cup water, divided
1 1/2 cups granulated sugar
1 cup light corn syrup
1/4 teaspoon salt
1 teaspoon vanilla extract (or 1/8 t. rose extract, available in Indian / Middle Eastern grocery stores or online)
½ c. superfine / baker’s sugar (or confectioner’s sugar)
Nonstick spray (but not the butter kind, as it will be noticeably yellow)
Pink or green food coloring (optional)
1. Butter a large 9 x 12 pan and dust with superfine sugar. (You can use confectioner’s / powdered sugar, but the superfine adds a pleasant subtle texture to the marshmallows. My mother would pulse granulated sugar in the food processor, so it was even less fine, and in some ways, I like that even better, with a little more crisp mouthfeel on the initial bite.) Also prepare an oiled spatula for later.
2. Empty gelatin packets into bowl of stand mixer (whisk attachment), with ½ c. water. 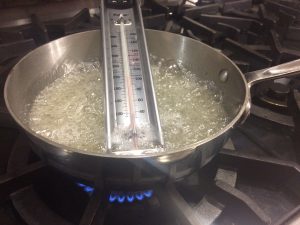 3. In a small saucepan (a bigger one will be heavy and hard to hold steadily at a later stage) combine the remaining ½ c. water, granulated sugar, corn syrup, and salt. Cover and cook over medium high heat for 4 minutes. Uncover and cook until the mixture reaches soft ball stage (240 degrees if you have a candy thermometer), approximately 8 minutes. Once the mixture reaches this temperature, immediately remove from heat; if it continues, it will swiftly turn into hard candy.
4. Turn mixer on low speed and, while running, slowly pour the sugar syrup down the side of the bowl into the gelatin mixture. (Be very careful with the sugar syrup, as it is scaldingly hot and will burn you badly if it gets on your skin.) Once you’ve added all of the syrup, increase the speed to high.
5. Continue to whip until the mixture becomes very thick and is lukewarm, approximately 12 minutes. Add food coloring, if using, during this stage. Add vanilla (or rose) during the last minute of whipping. (If adding rose extract, be careful — it’s very strongly flavored, and too much will ruin the sweets. Err on the side of caution.) 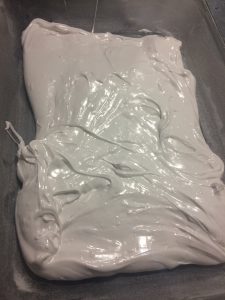 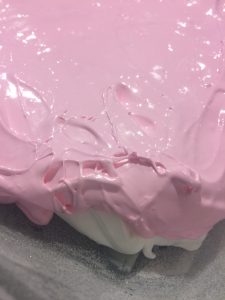 6. Pour the mixture into the prepared pan, spreading it evenly (and swiftly) with an oiled spatula.

7. Dust the top with enough of the remaining superfine sugar to lightly cover. Reserve the rest for later. Allow the marshmallows to sit uncovered for at least 4 hours and up to overnight.
8. Turn the marshmallows out onto a cutting board and cut into diamond shapes (traditional). As you’re cutting, lightly dust all sides of each marshmallow with the remaining superfine sugar, using additional if necessary. May be stored in an airtight container for up to 3 weeks, or frozen. 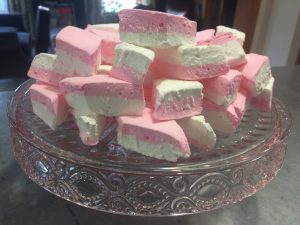