Today’s artist trading card was a zentangle, because several people recommended them. I glanced at a book, _One Zentangle a Day_, and was honestly a little off-put by how didactic it was about the format. There’s an official paper, and an official pen, an official way you’re supposed to initial your art, etc. and so on. That said, I did my initial drawing with the pencil I had on hand, instead of the pen they suggested, and I did get a little frustrated by the lack of precision, so I suppose they have a reason for their rules. Hm. 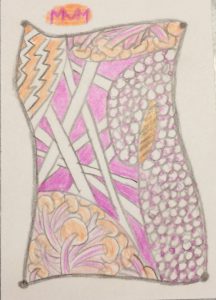 In any case, it was interesting, and I might do some more. I like the basketweave section of this best, though the mushroomy-thingies are kind of cute too. I don’t think I really got the borders between sections right; they’re more defined than I think they ought to be. Will try again, I think. But I think the wacky animals may be more my style.