Autumn is messy, but also glorious. Russian sage in foreground. 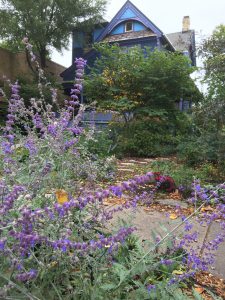 Toad lilies, lovely autumn shade plant. I was a little worried that they weren’t going to bloom this year, but they just got a slow start because the warm weather lingered so long, I guess. Happy now. 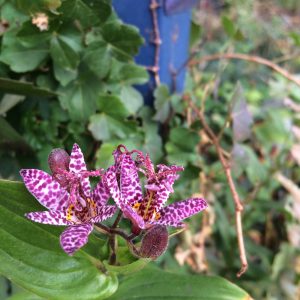 The monkshood / wolf’s bane came back! I wasn’t sure it’d gotten established enough last year, because I really neglected watering it in, but it seems to have survived my lackadaisical care.

Super-poisonous, but so cool. I have it tucked in a corner of the garden where the children and dog don’t go — it’s mostly just for me to appreciate. “This popular garden plant is one of the most poisonous plants in the garden but it has such a distinctive and unpleasant taste that cases of accidental poisoning are extremely rare though not unknown.” (http://www.thepoisongarden.co.uk/atoz/aconitum_napellus.htm)

You do need to be careful even just growing it: “Poisoning may also occur following picking the leaves without wearing gloves; the aconitine toxin is absorbed easily through the skin. In this event, there will be no gastrointestinal effects. Tingling will start at the point of absorption and extend up the arm to the shoulder, after which the heart will start to be affected. The tingling will be followed by unpleasant numbness. Treatment is similar to poisoning caused by oral ingestion.” 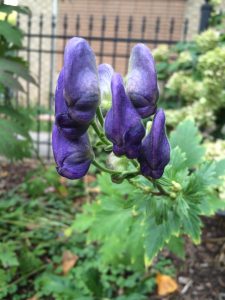