We went to the school’s welcome event, where we found out class assignments. Kavi was pretty upset (cried a bit, though she was trying to be brave) when she found out her three best friends were all assigned to another class together and she was separated. Poor munchkin — I would have been CRUSHED by that in elementary school. (Katharine, can you imagine?)

She did cheer up eventually, though — it helped that two of them showed up after a bit, and were very happy to see her, and one is coming over for board games on Saturday and the other is meeting her at the pool for swimming on Sunday. They had a good gossip on the playground for half an hour or so, and I think all will be well. 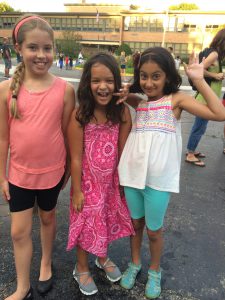 Anand was SO nervous about going back to school, poor munchkin. It turns out he’s assigned to Ms. C., Kavi’s teacher from that grade, and we’re a little worried, because Kavi thought she was strict. I have no idea how Anand will respond to strict — maybe the structure will help him? I don’t know. We’re all just crossing our fingers. But to give you a sense about how’s he’s thinking about it, after we said hello and exchanged a few sentences, we moved off — and then he went back to her. I followed, and he said, in his brave little six-year-old voice: “I may not be the best student right away, but I’ll do better after I settle in a bit.”

Oof. She smiled and assured him that he didn’t have to be the best at anything, which seemed to make him happy. So, fingers crossed, internet. Think good thoughts for our little monkey. He really does want to be good — pictured here with his kindergarten teacher (Kavi’s too), whom we all loved. He was so happy to see her. 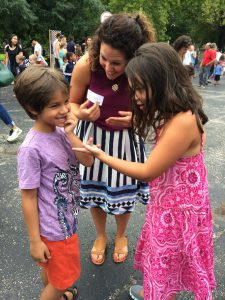 Everything is better with swinging. 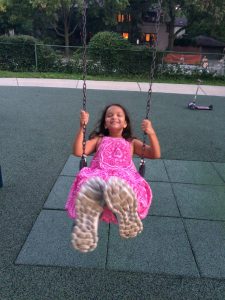 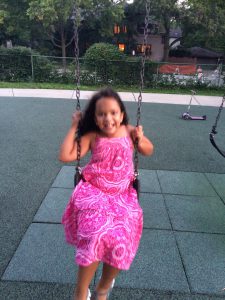 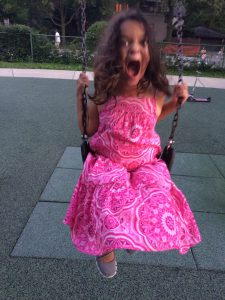