This is a terribly fuzzy photo, but I wanted to note that it was super-fun watching the Shatner documentary, _Chaos on the Bridge_, about the making of the first three years of Next Gen, which were apparently super-dysfunctional. It’s a neat little film; if you’re a Trekkie, I recommend seeking it out.  Melinda M. Snodgrass introduced the show, and I have to say, it added something special to have her sitting behind us and making snarky comments disagreeing with many of the people in the documentary. I had NO IDEA. 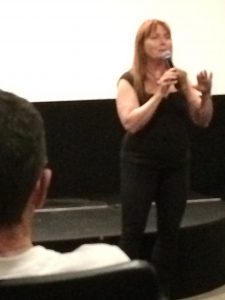