I think the most startling moment of yesterday was when someone started texting me, and I didn’t know the number, but it was logistical stuff about rides back to our hotel after the event, so I answered it. And later, I asked Melinda Snodgrass about the number, and she said, so casually, “Oh, that’s George’s number.” And I almost had a heart attack right there at the dinner table. George R. R. Martin’s phone number is in my cell phone. If you wanted to inundate him with fan theories as to how he should end Game of Thrones, I could make that happen. Of course, that would be a totally jerk move, and I would never work in this town again. But still. I COULD. You should have seen me at the dinner table; I was totally flummoxed.

Okay, backing up in time.  Laura J Mixon brought us to the hotel, and we quickly changed for the event. (I admit to having looked up on the internet what one should wear for tv, because I knew this thing was going to be broadcast on Youtube, so I share my newfound wisdom with you — rich colors, blue, green, or purple are ideal. Nothing too short; a knee-length dress is ideal, so you can move comfortably but still avoid flashing the crowd with your bits, esp. if they’re going to make you sit on tall stools up on a stage, as they did!) We walked in just as George was introducing us, and then Melinda took over, with the conceit that this was a talk show, and she was really her character, and we were all our characters being interviewed. So, impromptu acting! As George said in his intro, we’re writers, not actors, so if you decide to watch it once it’s online (will post a note once it is), be kind! I was super-nervous beforehand, but it was a small, silly event with a friendly crowd, and it turned out to be fine. I was Minal Patel, a joker who was trying to reach out to her missing ace ex-girlfriend. We had fun.

Afterwards, there was a mass signing, and the photos below feature a variety of Wild Cards authors. Then we went to Italian dinner at Franzo, which was very good — we would have done food more authentic to the region, but Santa Fe is a small town, and everything closes early, esp. on Sunday. Lovely time had by all — it was particularly good to have a chance to spend time with the incomparable Gwenda Bond and Christopher Rowe again; I usually see them briefly at conventions, but haven’t had a long conversation with them in years and years, I think. I have Gwenda’s YA Lois Lane books in my to-read queue, and her circus book too (Girl on a Wire), and I really ought to get to them. And now they’re writing middle-grade together, which I’m guessing Kavya would love. Hard to keep up with all my brilliant friends and their work! (Must watch less tv.)

More in next update… 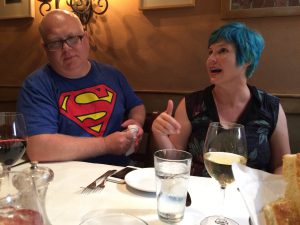 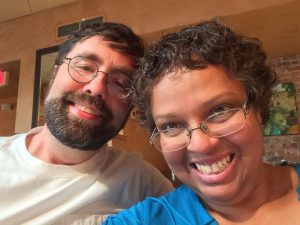 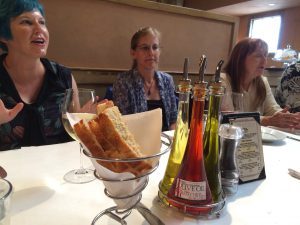 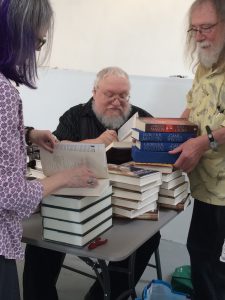