Finished a little early, my 45th birthday present from Kevin and Jed, a back patio and new seating! It’s nice that it’s done early, so it can be used during the upcoming party on the 23rd. 🙂 We had this area by the garage that had been originally intended sort of vaguely as a shady flower bed, but our back deck is tiny (big enough for a cafe table and two chairs, plus some plants), and for years we’ve really been wishing for a larger hanging out with family / entertaining space in the backyard. The random leftover condo furniture plopped in the mulch was just not appealing. 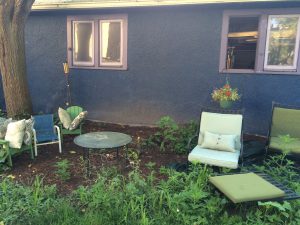 So we designed a little gravel patio, raised a bit to make it feel more like a separate space, with a small stacked stone retaining wall and a little planting bed surrounding it. 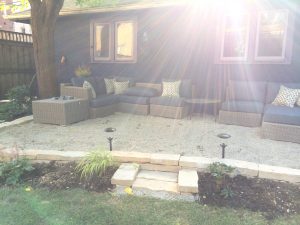 There’s a little more futzing to be done — I want to replace those hanging baskets with metal ones with coconut matting (I think I have those in my garage, actually, left over from our condo days), and add in some shade annuals (caladium, coleus) for brighter color in the bed. We’re planning to add a fire pit and some kind of small bubbling water feature. And Kevin has some scheme in mind for adding bars at the side and across the back to rig up some kind of privacy curtains, which I am a little dubious about, as I think it may make the whole thing too visually bulky, and I wasn’t sure we’d actually use them that much. But I told him I’d think about it. 🙂 If it were up to him, we’d enclose the whole thing in mosquito netting, but while I appreciate his deep hatred of mosquitoes, I think it’d be hard to do that in this space without ending up with visual weirdness.  Will try planting some mosquito-repelling plants; ageratum, marigold, artemisia, lavender, lemon balm. Smelly! 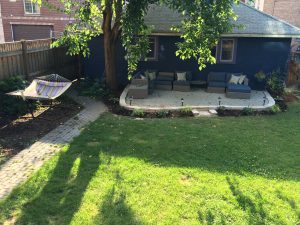 Thanks to Pam Whitehead for helping coordinate and design the project, Rudy’s Landscaping for installing (including re-doing it when they did it differently that we’d intended the first time), and Kevin and Jed for helping haul furniture around, plant hostas, heucheras, hellebores, etc., especially since I’m on lifting restrictions right now and can’t really move or plant anything. Oh, and thanks to Costco for having the least expensive set of this kind of furniture (their Niko line) in a color and style I liked better than the more expensive versions. 🙂