Facebook Instagram Youtube Twitter Patreon Shopping-bag
Menu
The garden I’m docent-ing    had this narrow trellis, just inside the fence, which supported a massive wisteria. We’ve been struggling with the lack of privacy in our backyard — as you can see in pictures 2-4, it’s overlooked by an apartment building immediately next door, as well as a set of new townhouses that are being built to the northeast. 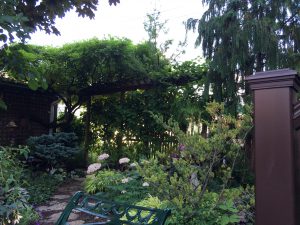 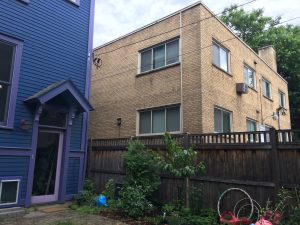 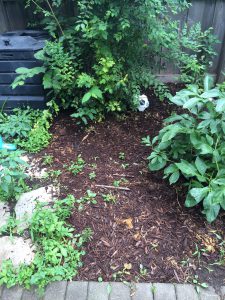 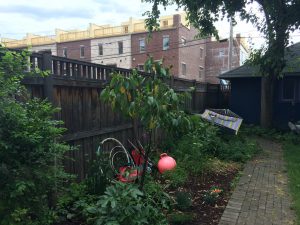 We’ve been talking about what we might do to amend that space. There are some plants there — a hedge rose, a somewhat blighted young cherry tree, but both of those could be moved, along with whatever random perennials and bulbs are there. I’m not sure where I’d put the hammock, but maybe it’d go to sun. But the question is what we could do for shade, given the restrictions on fence height (it’s currently at max).
The typical choice there is arborvitae, tall, skinny trees — I had been thinking they would be too wide, and would really crowd the space, but I’ve been looking at it again, after seeing some arborvitae at one of the other garden walk homes, and I think they might work there. The bed is about 4′ wide, I think? I should measure. Do you think a row of them would fit? It would make the yard somewhat darker / shadier, but I think that’d be all right — the other side is still plenty sunny, if we’re in the mood for sun.
Alternately, we could build a trellis like the one she put in for the wisteria, but build it even taller? Would that look goofy, to have a two-story trellis? It could run all the way to the garage, in theory, shielding the townhouses from view as well.

There are also fence extensions I think you can add to an existing fence (train clematis or some such over it for screening), though I might have to check code and/or check with my neighbor who owns the apartment building. I’m guessing he’d be fine with my adding more screening / privacy, that his tenants would like that at least as well as looking into my yard, but I should check with him.

A combination, maybe?  Arborvitae to anchor the ends and block the worst of the privacy issues, and a trellis or fence extension screens in the middle?  Another option is possibly bamboo (it looks like variety Nuda grows to about 10′ in the Midwest)?