I tried to add lilies to my garden this year — I’d had a few Stargazer and Starfighter before, but wanted more, so I added a half-dozen in front, and the same in the side and the back — or I meant to! But it turns out the bunnies LOVE my lilies. This is the only one that’s survived in the front; the others are nibbled down to a variety of picturesque stumps. I should take a photo of that to show you. Sigh.

Ah well, from the right angle, this one is still lovely. With bee’s balm, geranium, and hydrangea behind. 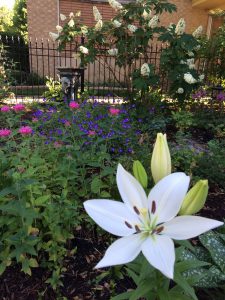 The monarda / bee balm is blooming now; I’d actually like to add the prairie native version of this, monarda fistulosa / wild bergamot, which is lavender-blue — if anyone knows of a local supplier, let me know? 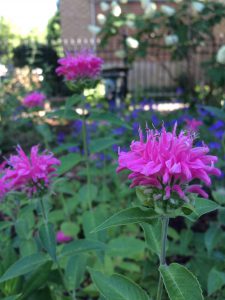 I totally meant to add supports to my Annabelle native hydrangea this spring, the kind that the plant can grow up through, and I completely forgot. So it looks lovely now, as it comes into bloom, but will likely be dragging on the ground in a month, especially if we get summer thunderstorms (as we usually do). Ah well. Next year!

Pictured with Ellie in front for scale! And Rozanne geranium, bee balm, and oak leaf hydrangea in back. 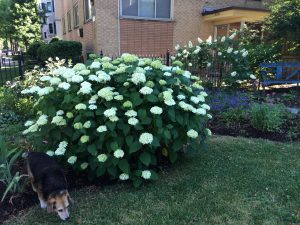 A new addition to the garden; I’ve mostly been concentrating on perennials, since with a limited budget, it seemed to make sense to buy plants that would come back year after year. But I decided to try adding one (!) annual this year — ageratum, that fuzzy purple thing in the left corner. It’s recommended for weaving together borders, and I really like it here and the couple other places I planted it; it does well mixed in with other plants. Here, it’s ageratum, then veronica, then Walker’s low nepeta, then another veronica (more purple), then just past that, some sea holly. Lots of different shades of blue-purple, basically. I’d like to add some pops of white and/or pink to that, but it’s a pleasing effect as it is. 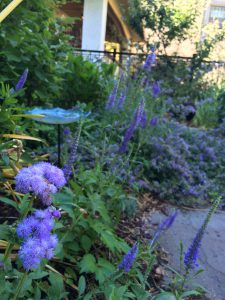