Named after Eglantyne Jebb, a social reformer: “She was known as the ‘White Flame’ because the flame of her dedicated love for children in distress burned to a white heat of passion all her life.” She founded Save the Children.

“In all the work the Fund did, a major element in Eglantyne’s thinking was the importance of a planned, research-based approach. In 1923, when the Russian relief effort was coming to an end, and the Fund’s income was sharply reducing, she turned to another issue – that of children’s rights. She headed to Geneva, to a meeting of the International Union, with a plan for a Children’s Charter. The result was a short and clear document – drafted by Eglantyne – which asserted the rights of children and the duty of the international community to put children’s rights in the forefront of planning. The Declaration of the Rights of the Child, or the Declaration of Geneva as it came to be known, was adopted a year later by the League of Nations.”

Eglantyne is a David Austin rose, an English Old Rose Hybrid, with strong fragrance and repeat flowering. I like it a lot, and recommend it unto you. (Note, though, that a lot of people prefer Sharifa Asma, which I haven’t tried, so you might want to compare the two.) 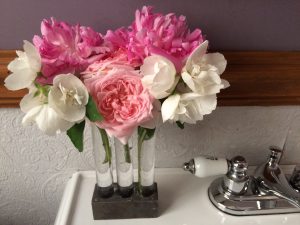