If I don’t keep updating as I go, WisCon starts to get away from me. Let’s see — when last seen, I was road-tripping up here with Ben, delightful. Arrived to the Room of One’s Own GOH readings (Justine Larbalestier, Nalo Hopkinson, Sofia Samatar), delightful per expected. Nalo’s reminded me of Jamaica Kincaid’s work, but with a science fictional twist — fabulous sardonic anger.

After that, we grabbed takeout from Noodles and went back to the room to play-test Ben’s game, Shtetl World, which was fun, but long, and I fell asleep. Got to bed properly around 2, I think? And then slept until 11 the next morning, which frankly shocked me — that’s 5 hours past my normal wake-up time! I blew right through the three hours I’d allocated for doing my revision of Tremontaine ch. 3, but Racheline kindly gave me an extension of a few days, or I would’ve really been having a melt-down yesterday.

As it was, the rest of the day was still pretty hectic, with art show set-up, party set-up, POC dinner, changing into my fancy party clothes (I felt like a desi space princess, since I eventually also had LED finger lights on my fingers), speaking briefly at Opening Cermonies (‘what WisCon means to me’), and then hosting our party. It went well — big crowd, sold quite a few books, so that’s nice. And I even got two samosas. Fun times promoting The Stars Change and Tremontaine with Ellen Kushner!

I did completely forget to put out the Indian sweets I’d brought (not that there was actually room on the tables if I’d remembered), so I think I’ll bring them to my reading and possibly the Strange Horizons tea party, if they can use them. I’m not sure who’s hosting the party this year — Niall? Could you use some jalebi and mithai?

Afterwards, spent some time in the POC safe space, just hanging with folks, and a bit at the Carl Brandon party, and a bit at the Think Galactic party — I have to thank them for their chocolate fondue fountain which was amply stocked with mango pieces as well as other fruit; I think I stood there for twenty solid minutes, chatting with delightful people and stuffing my face with mango drenched in warm chocolate. I think I may have to completely rethink my style of party-hosting, because it has never included a chocolate fondue fountain, and that seems to me a terrible error.

Then a nice chat back in the room with Jed about colonization, the social mechanics thereof, with an impromptu and unexpected side lecture on Minal Hajratwala‘s chapter in Leaving India on the tragedy of what happened to Surat (which book, surprisingly, I’d also referenced earlier that evening in the POC safe space when we were talking about South Asian West Indians and trying to trace that heritage). And then sleep.

That’s Friday, and I would tell you about Saturday, but this entry is already very long, and I have to edit party pictures first. So will pause here for now! But I leave you with Jed, helping me prep for the party. Couldn’t have done it without him and Leah Withers, of Serial Box! 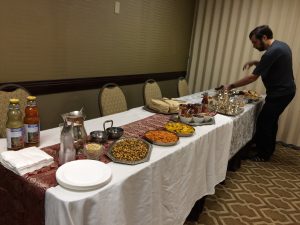