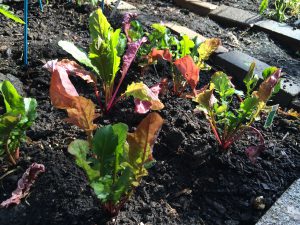 Evidence that the veggie garden is finally in, if messy. We built the raised beds last fall (kits from Gardener’s Supply Co.), and then yesterday, improvised beds on the other side with leftover bricks from the construction work seven years ago. Someday I’ll get rid of those bricks, but not yet! I watered last night, and again this morning, and they seem to mostly be recovering from the weeks of neglectful sitting in their pots on the back deck.  Water is a miracle. 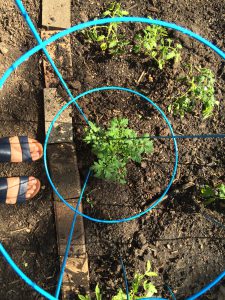 This is more ambitious veggie planting than I’ve ever done — we have strawberries, raspberries, snap peas, beans, corn, squash of multiple kinds, pumpkin, cucumber, kale, arugula, rainbow chard, tomatoes, tomatillos, and possibly something else I’ve forgotten. Plus the herbs and hot peppers in the hanging planters on the deck. 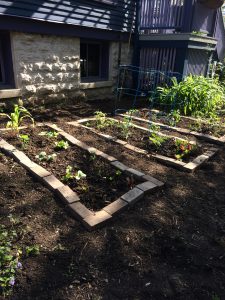 The last time I had a vegetable garden even close to this was back in my master’s program, where I rented a room in a house that had an already developed vegetable garden area. That was 1996 – 1999, so, lord, almost 20 years ago? I’ve only done tomatoes, herbs, and hot peppers since then, so I feel like I’m pretty much starting from scratch. I did remember to plant the squash, corn, and beans close together, because they’re good for each other in some mysterious way, but beyond that — we’ll just have to see. This is going to be a process of trial and error. 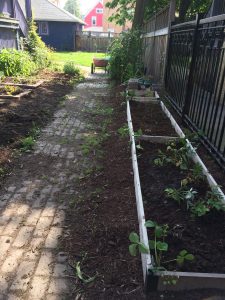 We rototillered compost into the somewhat clayish soil to improve it, and after WisCon, I’ll come back and put down mulch between the rows so it’s easier to walk on and less weed-prone.

Now the real question — can I keep it watered and weeded all summer long? And I have to remember to put netting on the peach tree this year, so the squirrels don’t steal them all, like they did last year. We got one perfect peach, but the rest became squirrel food…